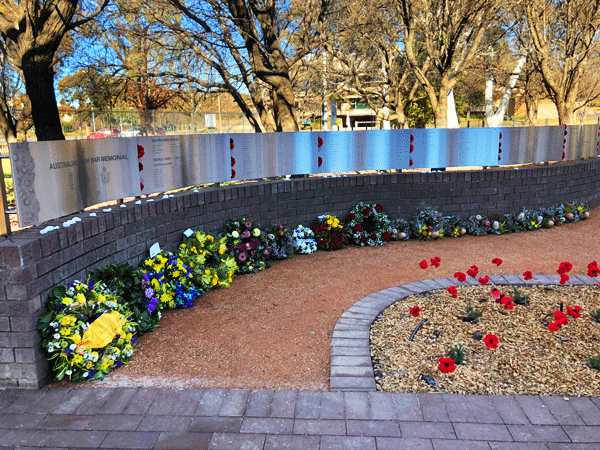 The ACTJC, the Canberra Jewish Centre has held a solemn ceremony in the grounds of the Centre dedicating the Australian Jewish War Memorial to honour Australian Jewish military personnel who have died in wars serving their country.

MC Dr David Rosalky Treasurer of the ACTJC read the welcome message from the President of the ACTJC,  Yael Cass, who is currently overseas.

She spoke on behalf of the ACT Jewish Community and noted that this event also marks the Centenary of General Sir John Monash’s Knighthood – a man of significance and stature who was a key architect of the allied successes in France that led to the end of World War I.  She hoped that all might learn from his contribution to our country.

Additionally, she pointed out the ACTJC was hosting the event in partnership with the Centenary of Anzac Jewish Program, the Federal Association of Jewish Ex-Service Men & Women, the Executive Council of Australian Jewry, the Australian Jewish Historical Society and the Sydney Jewish Museum.

Yael Cass hopes that the Australian Jewish War Memorial will stand as a symbol of Jewish contribution to the broader Australian community.

Dr Rosalky welcomed guests, including General Sir Peter Cosgrove, Governor-General of Australia and Lady Cosgrove. After paying respects to the traditional owners of the land, Dr Rosalky warmly welcomed all to the first ceremony, the dedication of the Australian Jewish War Memorial, which had long been a special project of the ACTJC.

A message from the Prime Minister Malcolm Turnbull,was read by the Julian Leeser MP, who spoke of the honour and privilege he felt to be part of the ceremony. The Prime Minister commended the ACTJC for the initiative involved in making the Jewish War Memorial a reality in Canberra. He noted that Sir John Monash, as one of Australia’s greatest military commanders, personified the Jewish history of service to country, both in wartime and peace.

The dedication address was given by Dr Keith Shilkin, President, Federal Association of Jewish Ex-Service Men and Women who said that Australia has a number of Jewish war memorials located in the various states but there has been no national Jewish war memorial, that is, until the ACT Jewish Community determined that such a memorial to all Jewish Australians who gave their lives while on active service should be built.

He also observed that this auspicious day marked the centenary of Sir John Monash being knighted on the battlefield by the King.

On behalf of the Federal Association of Jewish Ex-Service Men and Women (FAJEX) and all state affiliates, he extended his congratulations to the ACT Jewish Community and to all those who supported the project for bringing it to fruition. The memorial, identifying the names of all of the 341 Jewish service personnel who have given their lives in the nation’s cause, is a wonderful addition to other Jewish memorials throughout Australia.

He noted that the memory of their loyalty, commitment and heroism would be forever recorded on the monument for all to see and for all to reflect on what their sacrifice meant in securing our freedom and in upholding our values and our democratic way of life.

The prayer’s concluding lines states “May Your spirit vitalise this great land, may it enter the hearts of our government and leaders.  Protect the members of the ADF whether at home or overseas. Implant in our hearts a spirit of love and unity that we may work and live together in harmony and fellowship for the well-being of this society that we are building together.”

This soulful, beautiful prayer was followed by the laying of wreaths, which was accompanied by bagpipes.  Rabbi Shimon Eddi, Rabbi of the ACTJC and Rabbi Genende, jointly recited Kaddish followed by the The Ode for the Fallen recited by Warren Austin, President, WA Association of Jewish Ex-Servicemen and Women.

The Last Post was played followed by a minute of silence. The Rouse was played and the flag was raised.

During the dedication, several speakers mentioned the long and distinguished record of service of the Australian Jewish Community, from the Sudan Campaign of 1862 until the present day. Service in World War 1 comprised some 1800 Jewish men and women, with almost 200 paying the ultimate price. The last Jewish soldier to be killed on active service was in the Afghanistan War.

He thanked members of the ACTJC for his invitation and invited all assembled to carefully look at the photo of Sir John Monash being knighted by the King.