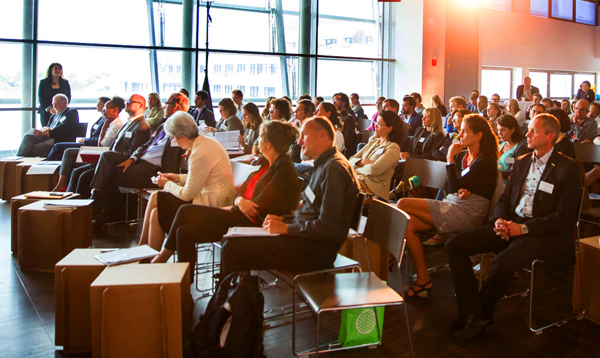 The creative economy is failing to live up to the fast-growing, young entrepreneurial image it promotes. Ars Electronica/flickr, CC BY-NC-ND.

Justin O’Connor, Not jobs and growth but post-capitalism– and creative industries show the way, The Conversation, 26 July 2017

The term “creative industries” was first applied to the cultural sector by UK New Labour in 1998, and rapidly gained global traction.

It was a kind of Faustian bargain for the cultural sector, which gave up its traditional suspicion of commercial imperatives in return for a seat at the grown-ups’ table where the governmental big bucks were allocated.

Perhaps it was not so Faustian after all. It seemed the “new” economy was all about ideas and experiences, creativity and left-of-field innovation. That’s less a sell-out and more a win-win. As cities shed their dirty industries, the creative sector would provide new, more fulfilling employment, rewriting the rules of the old economy as it did so.

The problems with this narrative are well aired. Software (which had been included precisely to bump up the numbers) and advertising and marketing accounted for most of the employment growth.

Outside these sectors (and often within) studies showed persistent low wages, high debt, self-exploitation, precarious employment (the “gig economy”), multiple job-holding (“don’t give up your night job”) and a nepotism that comes with excessive reliance on networking.

The divergence between the shiny narrative and the mundane reality is now blindingly obvious (at least outside the consultancy reports). Few in the cultural sector do more than lip-sync to its hymns.

But is this simply a story of deflation, of promises reneged? Might there be another narrative?

In recent years the notion of “post-capitalism” has become more widespread. Guy Rundle has been talking about this in Australia, and Paul Mason in the UK.

In part it continues the optimism about the transformative potential of new technologies that formed around the internet in the 1990s, and which gave the early “creative industries” agenda such a powerful charge.

But since 2008 many have felt that capitalism is no longer capable of delivering on that potential. It has been locking it up in monopoly platforms and extracting “rent” from what is essentially free.

Indeed, capitalism is intent on maximising short-term profit from these technologies while allowing the ecological catastrophe of climate change to let rip.

Rundle and Mason evoke the enormous potential of technological innovation, not just in communications but in medicine, materials science, agriculture, transport and the rest, but this potential is stuck in the old relations of capitalism.

Post-capitalism evokes not just the technology but the new kinds of social relations required for it to live up to its full human potential. They argue that these new technologies – distributed, networked, ideas-rich, decreasingly expensive – are giving rise to enclaves within contemporary society that provide a glimpse into a more human future.

Peer-to-peer networks, sharing and gift economies (for real, not Uber), open-source movements, non-monetary labour exchanges – all of these grow out of the essentially public and democratic nature of knowledge-based production and distribution. Capitalism squats on these new democratic forces, wringing profit from a knowledge it does not produce but seeks to own.

Rundle is the more naive politically, while Mason, re-inventing a Marxist political economy long thought dead and buried, recognises that systems are not given up without a fight.

What stands out, however, is a sense that things are already changing. We need not wait for the big collapse, but can work in the here and now to effect real social transformation.

This connects with the work of J.K. Gibson-Graham and others, who see older forms of social activism as working towards a different kind of post-capitalist future right here, right now.

There are, and will be, many objections to the coherence of the term post-capitalism and the agenda it announces. But perhaps it can help us rethink the creative industries.

Rather than the narrative of the fast-growing, entrepreneurial, start-up economy moving us into the next stage of knowledge capitalism, post-capitalism gives us a different story.

The low-waged, under-employed, precarious creative sector embarrasses the policymakers by not being really serious about growth (“lifestyle”) and failing to live up to the entrepreneurial image promoted at all those glitzy creative industry events. But these low-growth, socially embedded and ethically driven creatives may represent a future far more convincingly than those MBAs in hip clothing setting out to be the next “unicorn”.

The job of the creative sector is not to produce “jobs and growth” but cultural value. Those long hours on low wages and short-term contracts are accepted (mostly) as the price to create something of cultural value, to alter the world a little bit, to make us see it in a different way, to critique and to celebrate ourselves, and to bind us together.

This ecosystem of micro-businesses, freelancers and serial project workers represents the vast majority of cultural sector employment. They have been systemically sidelined from the grand creative industries narrative, but are, in fact, its main business.

Arguments for culture dressed up as economics no longer convince anyone. George Brandis, Donald Trump and 100 right-wing authoritarian cultural budget cuts across the globe testify to this.

It is time to give up on the fiction of the creative industries delivering post-industrial capitalism. Instead, we should acknowledge the new ways of making and sharing, the commitments to community and place, the social labour involved in creative work as a powerful resource for wider transformation of our common culture.

And, at the moment, the future of that common culture points us toward some kind of post-capitalism – rather than simply more of the same.