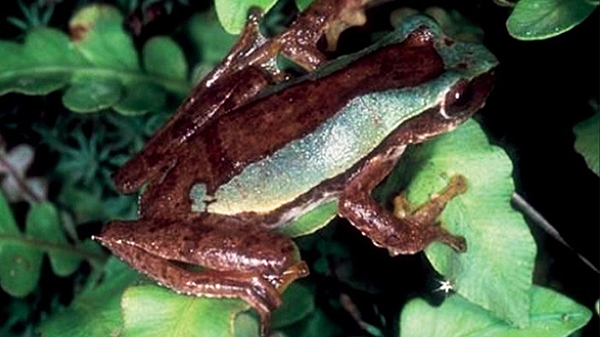 A Van Ban treefrog in the wild.

NDO – Vietnamese biologists from the Vietnam Academy of Science and Technology (VAST),, in collaboration with their Russian and German peers, have discovered three new species of treefrogs in the northern mountainous provinces of Lao Cai and Ha Giang.

Based on their analysis of morphology, molecular genetics and bio-sound, a team of researchers from the VAST’s Vietnam National Museum of Nature and Institute of Ecology and Biological Resources, along with researchers from the Zoological Institute of the Russian Academy of Sciences and Germany’s Cologne Zoo, have discovered and labelled the three new species, including the Van Ban treefrog (Rhacophorus vanbanicus), Frank’s treefrog (Zhangixalus franki) and Jodi’s treefrog (Zhangixalus jodiae).

The Van Ban treefrog is named after the standard sampling location in Van Ban district, Lao Cai province, at an altitude of 900m , an evergreen forest habitat on rocky mountains with high levels of humidity fog and drizzle.

The frog features a brown back with two green stripes on the back from the back of the eyes to the groin, forming a green triangle at the top. The underside of the thighs is yellow-orange with 5-7 characteristic black nodules. This species is of medium size with an adult male body length of about 34.8 mm, its head width less than length.

The findings were published in the specialist Russian Journal of Herpetology.

Jodi’s treefrog is named after Dr. Jodi Rowley from the Australian Museum for the female herpetologist’s outstanding contributions in the study of amphibian taxonomy in Asia. This species was found in Quan Ba district, Ha Giang province. 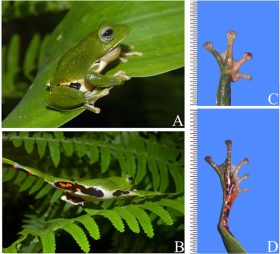 In terms of morphology, it has an average body length in the range of 36.1-39.8 mm, the width and length of the head are similar, the tip of the snout is round, the front and hind limbs have swimming membranes, a green back, cream-colored armpits with large black spots, and the groin and anterior-posterior parts of the thigh have alternating black and orange spots.

Its biological tones are recorded as being at 17.3-20.9 degrees Celsius with each vocal outburst lasting 1.1 seconds and consists of six notes, each lasting for about 6 milliseconds, and the distance between each note at about 15 milliseconds. The dominant frequency is 2.0kHz. Its voice notes have variable amplitude, with the last note having the smallest amplitude relative to the others.

The discovery of this new species was published in the Journal of Natural History. 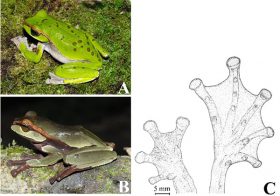 Standard specimens of Frank’s treefrog (A & B) and a drawing of the anterior and posterior swimming membranes (C).

The new species can be distinguished from other species in the Zhangixalus genus based on a combination of the following characteristics: a large body (from 77.9-85.8 mm in males), a green dorsal surface with small dark brown spots, white stripes separating the upper and lower side of the body, and well-developed parotid glands.

This species was found at an altitude of 1,300 m in Quan Ba district, Ha Giang province. Its typical habitat is tropical evergreen forest in the mountains.

The discovery of this species was published in the European Journal of Taxonomy.