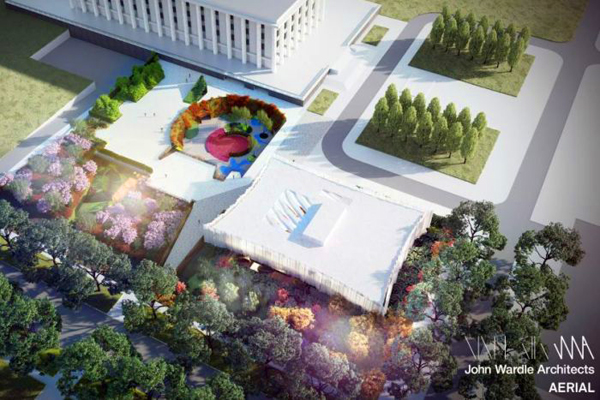 A national centre for Australian children’s literature is one idea floated in the submissions. (Joint Standing Committee on the National Capital and External Territories).

The National Portrait Gallery only opened 10 years ago, but there are already calls for a new landmark in Canberra.

Parliamentary inquiry submissions into the state of Australia’s national institutions have brought a range of proposals for something new.

Others aired gripes with many of Canberra’s existing ones, from the reliance of the National Gallery on “blockbuster” exhibitions to pull crowds, to plans for a major revamp of the Australian War Memorial.

While some simply pointed to the impact of funding cuts on those institutions, calling for more investment now and into the future.

But the ideas for a new iconic building are what captured the imagination of some Canberrans.

Should we celebrate giant lizards, thespians, or Mem Fox?

The most common idea was a natural history museum, either self-standing or joining with Questacon or the CSIRO.

One submission suggested an Australian Centre for Natural History, possibly on the shores of Lake Burley Griffin.

It pictures visitors being “stalked by dinosaurs or a 7-metre carnivorous lizard of the kind that faced Australia’s first human inhabitants”.

“Our natural history is unique and yet there is no national institution that tells this story of our past, our present environment and, most importantly, what we must learn for the future,” it reads.

The National Centre for Children’s Literature (Inc) wants to make its vision a reality, as a learning-based institution celebrating Australia’s offerings in the area.

It points to the success of works like The Treehouse series, Possum Magic, Nim’s Island and Diary of a Wombat as evidence the sector is worth celebrating.

It sees itself as “the collector and promoter of Australian creators who bring story and art into our hearts and minds.”

Another submission seemingly wanted Canberra to become the home of the Australian stage calling for the establishment of an Australian National Theatre.

But unlike the other submissions, it did not call for a new building at all, instead advocating a “building-less” option as a low-cost solution.

Despite the abundance of ideas for new manmade features the primary focus of the inquiry was the state of existing national institutions with many submissions suggesting plenty of improvements.

A $500 million upgrade of the Australian War Memorial, set to be considered by the Federal Government, was singled out by many submissions for criticism.

“Chinooks, Black Hawks and FA/18s are a small part of Australia’s war history, compared with say, the impacts of war on Australian families over more than a century (including families affected today by PTSD,” one submission noted.

“One wonders if future plans might include installation of mothballed frigates and submarines on Lake Burley Griffin,” suggested another.