May 17th, 2018 | Browse other: News. | Tagged with: Canberra's national institutions and funding cuts | 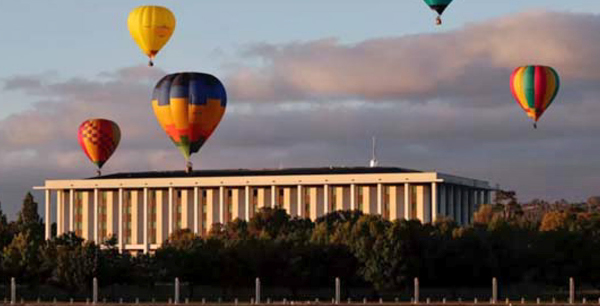 The National Library of Australia is one of Canberra’s national institutions to fight against funding cuts. Photo: Alex Ellinghausen.

Canberra’s national institutions can’t sustain further funding cuts and continue to serve the purpose for which they were created, a parliamentary inquiry has been told.

The inquiry, announced in March, is tasked with reporting on how Canberra’s museums, galleries and other institutions are increasing their revenue from the private sector and developing their own income streams. Many submissions, while championing innovations made at the institutions, have slammed the efficiency dividends that have led to staff cuts, reductions in exhibitions and outreach to regional Australia.

Many organisations have told the committee they are hamstrung in their attempts to digitise collections securely, and be accessible to the Australian public online, as efficiency dividends hamper their efforts to respond to changing expectations.

One of many of the galleries and museums to make a submission, the National Gallery of Australia has told the committee that it is at a crossroads after years of efficiency dividends have had a marked impact.

“Funding reductions have put the core purposes of the NGA at risk, with questions around financial sustainability, caring for the collection and the planning of our loans programs under constant review,” the submission said.

“The NGA can no longer find more efficiencies — we will be forced to reduce (and if necessary discontinue) some services and programs further, should future cuts occur.”

The Australian War Memorial has also told the inquiry that it needs more funds to continue its work.

“The efficiency dividend and [average staffing level] cap have had a disproportionately significant impact on the memorial, which simply cannot be sustained,” memorial director Dr Brendan Nelson wrote.

“From the necessary investment in staff and expertise to managing and developing the national collections and providing engaging exhibitions and public programs including outreach, the impact is significant,” he said.

The National Library of Australia’s submission said the caps on staff levels created significant challenges, with the possibility the library could become a victim of its own success as it gained new members for its online portal Trove.

“These challenges will increase if the library is successful in growing the Trove membership base while [average staffing level] remains fixed,” the submission said.

Cuts to funding for national institutions could have a cumulative effect on the nation’s capital, the National Archives of Australia told the committee, as reductions in services and exhibitions are felt by the public.

“This would in turn diminish Canberra’s reputation and attractiveness as a tourist destination and capital city, particularly if other national institutions make similar moves in response to increasing budget and resourcing pressures,” the submission said.

The Museum of Australian Democracy at Old Parliament House told the inquiry that while it had established a revenue committee to investigate its own revenue streams, charging an entrance fee clashed with its duty to the Australian public.

“There is a tension however between the public desire for all Australians to experience the wonder of our first Parliament and to learn about our democracy, with the impact on visitation any increased entry fees would impose,” the submission said.

The Community and Public Sector Union has told senators that efficiency dividends applied to Canberra’s cultural institutions in 2015 ripped $36.8 million of funding over four years from the bottom line.

For cultural institutions to thrive, a new funding model must be found, and caps on staffing levels removed, the union said.

The inquiry by the Joint Standing Committee on the National Capital and External Territories was announced in March, and is chaired by West Australian Liberal MP Ben Morton, with Canberra MP Gai Brodtmann as deputy chair.