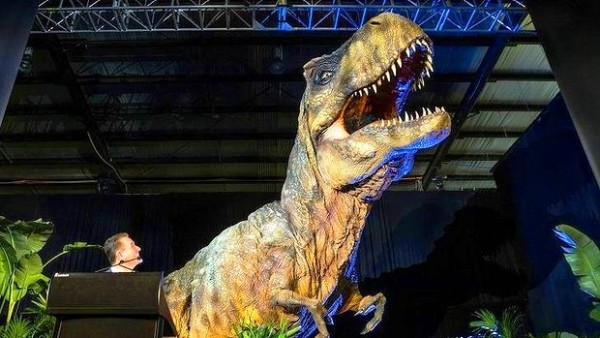 It might have been the greatest heckle of a politican  this year: Minister for Tourism and Major Events John Eren​ was rudely interrupted during a speech on Sunday morning by an ungodly roar – and the appearance behind him of a massive, moving Tyrannosaurus Rex.

Mr Eren​ was announcing the Melbourne Museum’s new blockbuster exhibition for 2016, the world premiere of Jurassic World: The Exhibition. In a major coup for Victoria, Museum Victoria has partnered with Imagine Exhibitions and Universal Partnerships for a new immersive​ exhibition based on the Steven Spielberg-produced film Jurassic World, which has grossed $1.67 billion globally, making it one of the biggest blockbusters in cinema history.

The exhibition, which will premiere in Melbourne before touring the world, features life-sized animatronic​ dinosaurs created by Melbourne’s Creature Technology Company, renowned for producing the world’s most technologically sophisticated animatronics, including those from the global hit Walking With Dinosaurs, the arena show that outsold the likes of U2 and Madonna.

After the first T-Rex roar – and gasps from assembled reporters – Mr Eren described the exhibition as “an absolute showstopper” expected to inject $8 million to the state’s economy.

“It’s a feather in our cap in retaining our title as the major events capital of the nation,” he said, adding “big exhibitions like Jurassic World mean thousands of visitors converge on Victoria, and that’s an enormous win for Victorian businesses and the state’s economy.”

Dr Patrick Greene, CEO of Museum Victoria, said the world-first exhibition the exhibition was sure to inspire young minds with its combination of cutting-edge technology and research; visitors will encounter the dinosaurs in “themed” environments inspired by Jurassic World and researched by palaeontologist Jack Horner who worked as an advisor on the hit film.