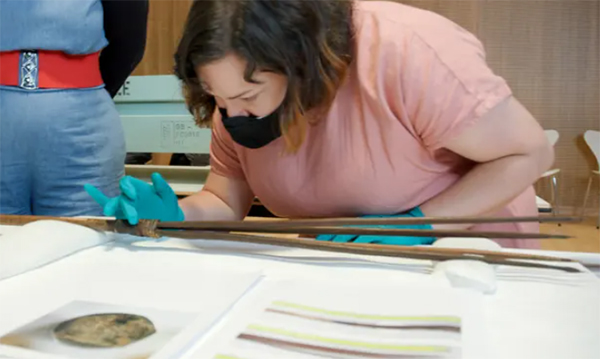 Cambridge’s Prof Nicholas Thomas said the spears ‘reflect the beginnings of a history of misunderstanding and conflict’. Photograph: University of Sydney.

Three Indigenous spears taken by James Cook will be returned to Sydney for the first time in 250 years.

The spears, described as “exceptionally significant”, have been loaned by the Museum of Archaeology and Anthropology in Cambridge for display at the University of Sydney’s Chau Chak Wing Museum for three months from Friday.

Cook first landed in Australia in 1770, upon Kamay land. There, his Endeavour crew was resisted by Gweagal men from the clan of Dharawal nation, traditional owners of the southern area of what is now called Botany Bay.

The Gweagal men were shot at, withdrew, and 40 of their spears were stolen, as recounted in the journals of Cook’s Endeavour voyagers. “We … thought it no improper measure to take away with us all the lances [spears] which we could find about the houses, amounting in number to forty or fifty,” Joseph Banks wrote on 29 April 1770.

Now, three of the four remaining Kamay spears will join 37 contemporary spears symbolising those stolen on display at the University of Sydney’s Chau Chak Wing Museum.

“The spears taken away by Cook and other members of the Endeavour’s crew are exceptionally significant,” Cambridge Museum of Archaeology and Anthropology (MAA) director Prof Nicholas Thomas said.

“They are the first artefacts collected by any European from any part of Australia, that remain extant and documented,” Thomas said. “They reflect the beginnings of a history of misunderstanding and conflict.”

“These items are an important part of the cultural identity of the peoples they came from and of the knowledge they hold,” Prof Lisa Jackson Pulver, the university’s deputy vice-chancellor (Indigenous strategy and services), said.

She said their display will ensure “ongoing cultural connection and practice”.

Dr Paul Donnelly, acting director of the Chau Chak Wing Museum, said in a statement that “the university was taking a leading role in enabling conversations while providing a culturally safe space for the spears’ display”.

In an effort to facilitate closer collaboration between museums and Indigenous communities, the temporary display will be the focus of education programs developed with the La Perouse Local Aboriginal Land Council for the local Aboriginal and wider community.

“Many of the families within the La Perouse Aboriginal community are descended from those who were present during the eight days the Endeavour was anchored in Kamay,” Noeleen Timbery, chairperson of the La Perouse Local Aboriginal Land Council, said.

“We will continue to work to ensure our community’s access to these and other important artefacts and materials,” she said.

“They remain an important connection to our past, our traditions and cultural practices, and to our ancestors.”