You are here: Home » Articles filed under: 'News' » Article: 'Kanalaritja: An Unbroken String' 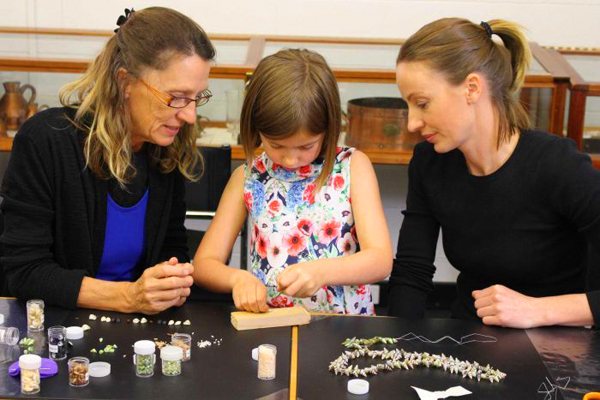 Just five years ago there were real concerns the ancient Aboriginal practice of shell stringing would be lost in Tasmania.

In 2010, the Tasmanian Museum and Art Gallery (TMAG) started running luna tunapri [women’s knowledge] workshops in the hope the cultural practice, which dates back at least 2,000 years, could be kept alive.

The cultural revitalisation project was such a success a range of necklaces spanning nearly 200 years, created by living pakana [Tasmanian Aboriginal] elders, their ancestors and the next wave of “stringers”, will be displayed in a nationwide exhibition.

Indigenous Cultures senior curator and pakana woman, Zoe Rimmer, said that during the workshops women who had not learnt shell stringing from their families were guided through the intricate processes of collecting, cleaning and stringing.

“Shell stringing was one of the only practices that was continued throughout the invasion and colonisation of Tasmania so it’s something that obviously had a special importance to people,” Ms Rimmer said.

“And now [the necklaces] are incredibly beautiful pieces that people wear to celebrate our culture and identity.

“It’s something that has been handed down through generations and was maintained by only a small number of families on the Bass Strait islands.”

Through the workshops Ms Rimmer’s mother, Tahana, was able to learn the skill of shell stringing for the first time.

“One of my ancestors, Pularilpana, was taken by sealers to the Furneaux Islands in the early 1800s,” Tahana said.

“My mum was born on Flinders Island, [but] when my mum was young a lot of our culture, it was taboo. It was fairly well covered up.

“It was unfortunate that we lost that opportunity to gain that [shell stringing] knowledge.

Positions Vacant » View All
» Deputy Director, Engagement – SAM
» Asst Registrar: Access & Documentation – MAGNT
Latest News » View All
AAS, CE Anna-Maria Arabia awarded honour
- Knight of the Order of the Star of Italy Read more.
HTSA – Instants & Places of the Italian Front
- Knight of the Order of Vittorio Veneto Read more.
Royal Pavilion & Museums restructure follows
transfer to independent business & charity Read more.
Just like museums, libraries aren’t neutral
- a perspective on the catalogue Read more.
Igorot axe seized & restored to Philippines
via ABF, OFTA, DFAT et al collaboration Read more.
Top +
Council of Australasian Museum Directors, c/o Ms Daryl Karp, Museum of Australian Democracy at Old Parliament House PO Box 3934 Manuka, Australian Capital Territory 2603 Australia, © CAMD 2021
Copyright: All information and resources provided on this website remain the copyright of the Council of Australasian Museum Directors. Permission is granted for viewing and downloading for personal and not for profit purposes. Those wishing to reproduce any materials for commercial, educational or other uses are requested to contact us.
Disclaimer: The content of this website is provided for information purposes only and is not intended as a substitute for professional advice. No claim is made as to the accuracy or authenticity of the content of the website. The Council of Australasian Museum Directors does not accept any liability to any person for the information or advice (or the use of such information or advice) which is provided on this website. The information on our website is provided on the basis that all persons accessing the site undertake responsibility for assessing the relevance and accuracy of its content. No responsibility is taken for any information or services which may appear on any linked web sites. Hostgator.
.