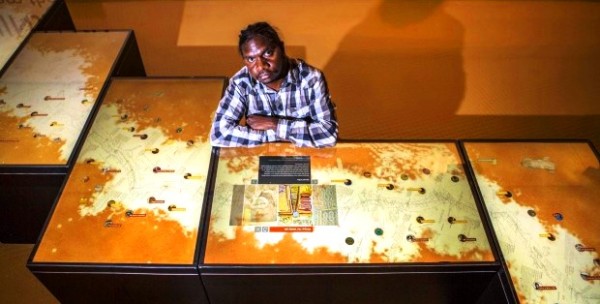 Kaninjaku​: Stories from the Canning Stock Route, curated by Carty, explores the history of the West Australian droving route through the stories of the country it cuts across.

Dr Carty said it was an example of “cross-cultural history”, taking stories of contact and conflict between Indigenous and non-Indigenous peoples but also the history of the Dreaming and the importance of the land in Indigenous culture.

The Canning Stock Route, the longest historic stock route in the world, was first surveyed in 1906 by Alfred Canning and comprised 48 wells spaced at intervals of no more than one day’s walk apart, along an 1800-kilometre stretch of track. The route links Wiluna in the south with Sturt Creek in the north and traverses the traditional lands of nine Aboriginal language groups but Canning did not display any knowledge of or sensitivity to them.

The exhibition showcases new works from The Canning Stock Route Collection from the National Museum’s National Historical Collection, including 17 pieces never shown before. The collection contains 116 paintings, sculptural works, contemporary cultural objects, documentary materials and oral histories by 60 artists who travelled along the Canning Stock Route on a return-to-country trip in 2007. This project – recording the impact of the stock route on Indigenous lives and country – was initiated by FORM, a not-for-profit arts organisation in Perth. It was acquired by the museum in 2009 and was first exhibited in 2010.