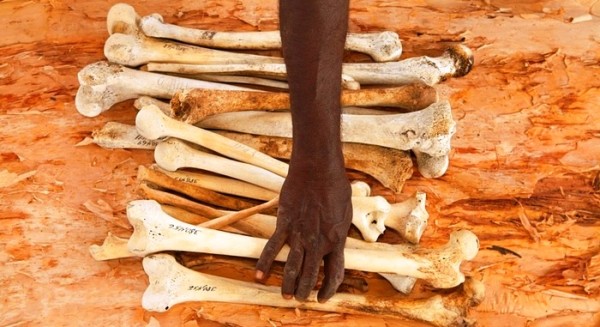 Aboriginal remains repatriated to Arnhem Land from the Smithsonian Institution in the US. Source: The Guardian. Photo: Getty Images.

The federal government should ditch its plans for the $100m-plus Anzac Sir John Monash “interpretive centre” on the western front in Europe and redirect the money to a much-needed national keeping place for the stolen remains of Indigenous Australians.

Countless tens of thousands of Aboriginal and Torres Strait Islander people were killed on the Australian frontier after the European invasion in 1788 as a direct result of British colonisation.

The remains of thousands of them – and those of many others who died of natural causes and were removed from sacred ancestral burial sites – were stolen for the collections of museums and medical institutions in Britain, continental Europe and the US.

More than a thousand remain in Australian collecting institutions, including the National Museum of Australia, where body parts belonging to about 400 Aboriginal and Torres Strait Islanders are still in special storage. They have been repatriated from overseas but can’t be returned because their provenance is unclear.

While the repatriation of Indigenous remains from overseas continues, there is no central keeping place in Australia for those remains that cannot – and are unlikely to ever – be connected to specific people or country. Late last year the federal government’s advisory committee for Indigenous repatriation recommended that the government invest in a keeping place in Canberra for the stolen remains that cannot, for various reasons, be returned to their people.

Leading Indigenous figures, including Shane Mortimer, an elder of the Ngambri – upon whose land the national capital stands – have consistently argued that any keeping place should double as a centre for scholarship and a memorial to the tens of thousands of Indigenous Australians who were killed in frontier war conflicts and massacres across the continent until well into the 20th century.