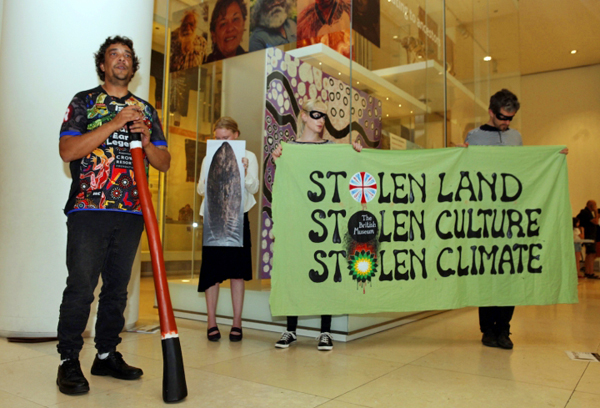 On June 18, Indigenous Australian activist Rodney Kelly gave a talk inside the British Museum to protest the museum’s ownership of the Gweagal shield (all photos by Anna Branthwaite).

On Sunday, with help from the theatrical protest group BP Or Not BP?, Rodney Kelly appealed to the public for the return of the Gweagal shield.

Kelly, who has been campaigning for the shield’s return to Australia, visited the BM yesterday to hold a series of unsanctioned “rebel lectures” aiming to expose the shield’s history, discuss other ill-gotten items in the museum’s collection, and explain — with support from theatrical protest group BP Or Not BP? — why oil giant BP is an unacceptable sponsor for the museum. The group says the energy giant’s sponsorship “effectively brands all the artifacts in the museum with the logo of this destructive company.” The museum signed a new five-year sponsorship deal with BP in 2016.

“I’m hoping to gain support for the cause, and to educate people so they understand why we need the shield back,” he told Hyperallergic. “It went well: people listened and learned. I’ve had no contact with officials today, but I’m meeting a curator [Monday] to discuss the ownership and testing of the shield.”Kelly arrived at the BM equipped with a didgeridoo and clap sticks, and headed to the “Living and Dying” Room to speak next to a cabinet of Indigenous Australian objects. (The Gweagal shield is not currently on view as it is undergoing “scientific analysis and historical research,” according to a museum spokesperson.) Between talks, Kelly played the traditional musical instruments, and BP Or Not BP? supplemented statements on the hypocrisy of BP’s sponsorship with their own, while performers dressed as robbers held a banner with the slogan “Stolen Land, Stolen Culture, Stolen Climate.” Members passed out informational flyers that mimicked the museum’s house style, appearing at first glance to be official notices. The museum did not intervene in the unsanctioned event.

Each of Kelly’s talks attracted between 30 and 40 curious tourists and visitors, and reactions from the public were broadly supportive, though one passerby commented: “There’s a double message here — I think sponsorship and repatriation should be discussed separately.” Another said: “I don’t think BP’s sponsorship is a good deal for the British Museum. They’re getting a nice image for their company, but the amount the museum is paid in return for this controversy isn’t enough.” Between 2017 and 2022, the museum will receive around a quarter of BP’s £7.5 million (~$9.7 million) budget for cultural sponsorships between 2017 and 2022.

Kelly, who only able to travel to the UK thanks to a crowdfunding effort, had hoped that museum officials would meet with him after what he described as past ‘failures’ in communication. Kelly met with museum trustees in October 2016, but has heard little since.

Positions Vacant » View All
» Ticketing Services Coordinator – MAAS
» Assistant Project Officer – MAAS
Latest News » View All
AWMM’s Scala Arts Director’s Choice
- first free access digital edn Read more.
AM teacher who loved her job
- leaves AM $7 million Read more.
Commentary: “Met contemplates selling art
treasures while rich trustees sit idle" Read more.
UK museum classification delays reopening
"If you can open H&M you can open the V&A" Read more.
BM hire curator to research colln history
incl contested objects eg Parthenon Marbles Read more.
Top +
Council of Australasian Museum Directors, c/o Ms Daryl Karp, Museum of Australian Democracy at Old Parliament House PO Box 3934 Manuka, Australian Capital Territory 2603 Australia, © CAMD 2021
Copyright: All information and resources provided on this website remain the copyright of the Council of Australasian Museum Directors. Permission is granted for viewing and downloading for personal and not for profit purposes. Those wishing to reproduce any materials for commercial, educational or other uses are requested to contact us.
Disclaimer: The content of this website is provided for information purposes only and is not intended as a substitute for professional advice. No claim is made as to the accuracy or authenticity of the content of the website. The Council of Australasian Museum Directors does not accept any liability to any person for the information or advice (or the use of such information or advice) which is provided on this website. The information on our website is provided on the basis that all persons accessing the site undertake responsibility for assessing the relevance and accuracy of its content. No responsibility is taken for any information or services which may appear on any linked web sites. Hostgator.
.