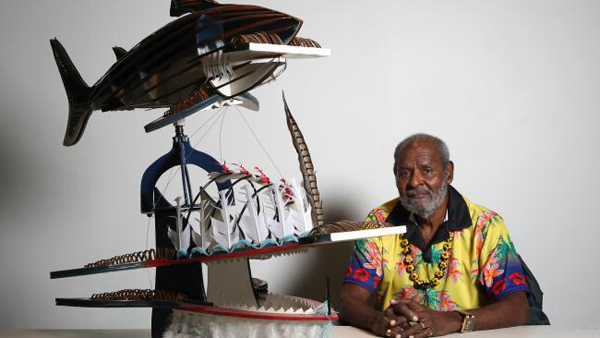 On May 27, 1967, 17-year-old Ken Thaiday Sr sat wide-eyed in front of a black-and-white television and watched on as the Australian people voted to recognise Aboriginal people as part of the population. On Friday, 50 years after the “life-changing” referendum, the Torres Strait Island artist stood on stage at the Sydney Opera House as the winner of the prestigious $50,000 Red Ochre prize at the National Indigenous Art Awards.

Thaiday, whose artistic headdresses and installations hang in major galleries around the country, said the award was a career-defining honour, and reflected on how far the country had come since 1967. “[The referendum result] made me feel like everything was changing,” he said. “Now it’s much better. You can see that today — everyone has come together. This award is very special for me so. It’s the chance I thought I would never get.”

Thaiday lives on the remote island of Erub (Darnley) — population 400 — in the Torres Strait, where he mentors young people in visual art and indigenous culture. He says creative pursuits are an intrinsic part of Aboriginal culture.

“When an indigenous person would like to do painting, it’s a new start for them,” he said.

Thaiday is one of 30 indigenous artists whose work has been selected for the National Gallery of Australia’s National Indigenous Art Triennial, Defying Empire, which opened last week. His works are focused on Torres Strait culture, and mainly consist of a Dari, a headdress worn by islander men during celebrations. “Everything I do represents my home … we’re the people of the land and the sea. And this is [award] is a blessing to all of us,” he said.

Actor, and film and theatre director Lynette Narkle (The Sapphires) was also honoured with the Red Ochre prize at the awards — which are funded by the Australia Council — for her services to the arts and the community. Teila Watson received the Dreaming Award for young artist of the year, while Lisa Maza was awarded the NIAA Fellowship, an award that provides two years of financial support for a major project.

Rupert Myer, Australia Council chairman, said the extent to which Thaiday and Narkle and others had contributed to the vibrancy of the arts in Australia could not be underestimated.

“Their artistic practice, storytelling and cultural knowledge sharing plays a vital role in maintaining the strength and visibility of our First Nations cultures, and is central to our national identity,” Myer said.