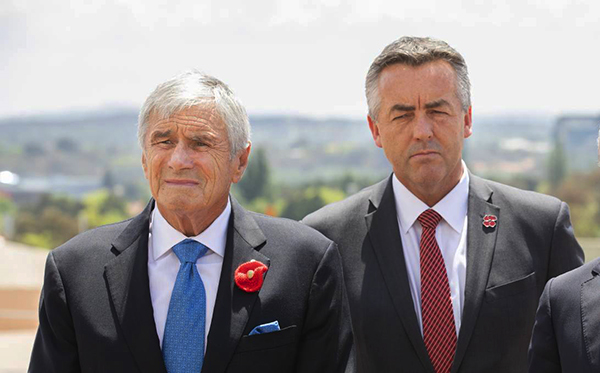 Veterans’ Affairs Minister Darren Chester has defended the decision to extend the appointment of billionaire businessman Kerry Stokes as chairman of the Australian War Memorial board.

Mr Stokes will remain the chair for another 12 months, while the memorial undergoes a $500 million redevelopment.
At the unveiling of a new sculpture design on the memorial grounds to recognise the sufferings of war and service on Wednesday morning, Mr Chester told reporters that Mr Stokes had served the country in both business and in philanthropic ways.

“His generosity is a benefactor to the council and to other incredibly important causes around the world is well as recognised,” Mr Chester said.

“I think a man of his business acumen is very important for the council, while they go through such a major redevelopment involving tens of millions of dollars of Australian’s money.”

“I’d like to put a person with business and corporate expertise in that role during this period.”

The memorial expansion was a way to provide additional space to tell the stories of modern veterans is a sign of respect and a grateful nation publicly saying “thank you for your service”, Mr Chester recently wrote in The Canberra Times.

Hundreds of submissions to a consultation on the redevelopment were critical, leading local Labor MP David Smith to say that “many of those voices don’t feel like they’re being heard“.

Mr Stokes’ continued association with the memorial has been controversial with some veterans groups and several former memorial staff, and for his public support and bankrolling of legal action taken by his employee, Ben Roberts-Smith, against media outlets, including The Canberra Times.

Mr Chester said everyone in Australia got a presumption of innocence.

“What we’ve seen in recent times in terms of some of the coverage involving some of our veterans has not allowed them that presumption of innocence,” he said.

Mr Stokes has been on the board of the memorial since 2007 and will have served as chairman for six years this November. He has been inducted as a fellow of the memorial, and long been associated with some returned servicemember organisations as a supporter.