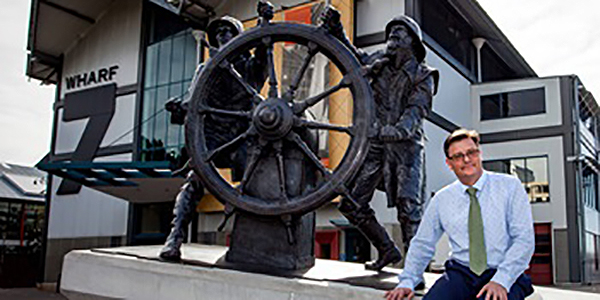 The Council of the Australian National Maritime Museum today announced the departure of its long-serving Director and CEO Kevin SumptionPSM.

Mr Sumption has today been announced as the incoming CEO of the Sydney Jewish Museum commencing in February 2022.

John Mullen, Chair of the Museum Council said, ‘Kevin is the third person to have held the post of Director at the Australian National Maritime Museum since it opened in 1991, and has led the Museum through substantial growth since his arrival in 2012. Under his leadership the Museum has become one of the most visited museums in Australia.’

The Museum also has one of the highest levels of self-generated income of Australia’s leading cultural institutions.

Key achievements during Mr Sumption’s directorship have been modernising the Museum’s ‘visitor experience’, the successful creation and roll out of the MuSEAum brand, the conceiving and delivery of the Sydney Harbour Gallery, and the Under Southern Skies gallery, the conceptual development and the delivery of the multi-award winning Action Stations Warship pavilion in 2015, the new Bex Lexcen Terrace venue in 2020 and the Museum’s new store which will open later this year.

Mr Sumption has significantly enhanced the Museum’s national leadership of Australia’s migration story, most recently culminating the elevation of the Museum’s Welcome Wall to the National Monument to Migration.

He was instrumental in establishing the Museum’s first Indigenous maritime curatorial team with their focus of developing a new national collection, as well as an extensive program of Aboriginal and Torres Strait Islander exhibitions, including the multi-award-winning Gapu-Monuk Saltwater – Journey to Sea Country.

Mr Sumption’s passion and expertise in online education has led to the development of the Museum’s multi award winning online education games: The Voyage; Cook’s Voyages and the recently launched Wreck Seekers. This has seen an increase in digital engagement by students of over 200,000 in the past year.

Through his leadership, Mr Sumption has enabled the Museum to successfully share Australia’s maritime history from both Indigenous and European aspects. This was acknowledged at the 2021 Museums and Galleries National awards, with the exhibition Mariw Minaral (Spiritual Patterns) being selected for the Indigenous Projects award and Cook’s Voyages – the view from the shore in the Interpretation, Learning and Audience and Engagement category.

Mr Sumption has driven a reactivation of the Museum’s Foundation and attraction of several major gifts (SY Ena and Duyfken) and important maritime archaeological projects, including the finding of the AE1 and the ongoing search for the remains of HMB Endeavour.

Mr Sumption was recognised with a Public Service Medal (PSM) for his outstanding public service as in 2017.

Mr Mullen concluded, ‘The Council offers their congratulations to Kevin on his new role at the Sydney Jewish Museum. We wish him every possible success and we thank him for his tireless work and stewardship during his time at the Museum.’

The Museum will commence a global search for a new Director and CEO shortly.