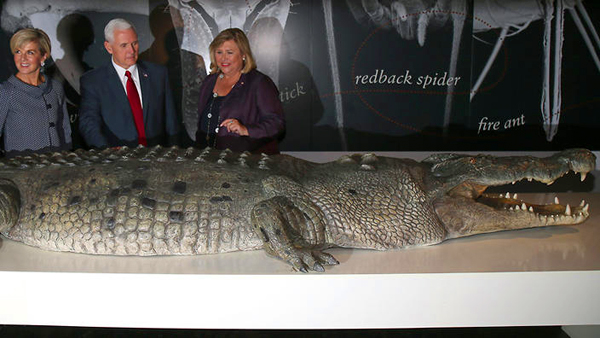 Vice President Mike Pence has come face to face with a model of an enormous crocodile at a museum in Sydney during his Australian visit.

Vice President Mike Pence has been given a guided tour of Sydney’s Australian Museum, where he came face to face with some of the Australia’s deadliest animals.

Mr Pence was greeted by Foreign Minister Julie Bishop and the museum’s executive director Kim McKay for the brief tour about 2pm on Saturday.

Fresh from bilateral talks with Prime Minister Malcolm Turnbull, the visit represented a lighter side to Mr Pence’s weekend trip to Australia.

Ms McKay and Ms Bishop escorted the vice president through two displays, including a cast of an estuarine crocodile – the largest of all living reptiles and one of the most iconic Australian creatures.

Ms McKay told Mr Pence the reptiles can grow as large as four metres in length.

The museum is also custodian to one of the largest Pacific cultural collections in the world and Mr Pence was shown a cape of netted fibre known as “Captain Cook’s Cape”.

The carefully-constructed piece of fibre and feathers was given to Captain Cook by Hawaiian King Kalani’opu’u in 1788 and acquired by the museum in 1895.