You are here: Home » Articles filed under: 'News' » Article: 'Kim McKay’s AM world is magical'

Kim McKay’s AM world is magical 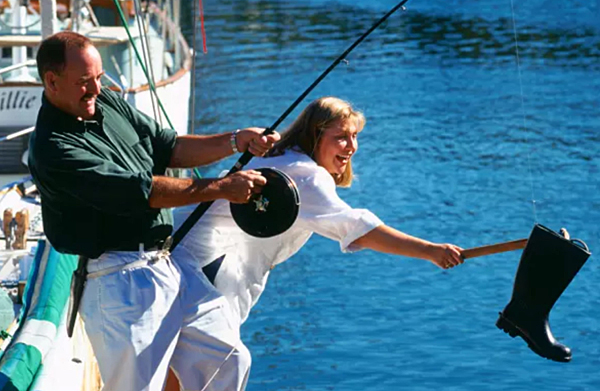 Charles Purcell, ‘If you want to do something, you don’t ever take no for an answer’: the Australian Museum’s Kim McKay, The Sydney Morning Herald, 26 May 2018

Australian Museum director and CEO Kim McKay can remember the exact moment she became interested in the environment.

One of McKay’s high school teachers at Mackellar Girls at Manly Vale introduced her class to a book called Travels With Charley: In Search of America, which depicts author John Steinbeck’s road trip to rediscover the United States in 1960. Steinbeck was shocked to revisit a formerly pristine town that had become environmentally degraded.

“’Here the air smells of chemicals and the rivers are choked and poisoned’,” quotes McKay.

“For some reason that observation struck a real chord with me. I went down to the second-hand bookstore in Manly that afternoon and bought a book called Pollution. I still have it. “It showed a picture on the cover of a big pipe, and polluted water running out of it, and dead fish, and a river.”

Many years later, while working with Ian Kiernan on a round-the-world yacht race – and hearing tales of the beautiful seaweed of the Sargasso Sea full of toothbrushes, combs and plastic – they shared the idea for a clean-up of Sydney Harbour, later to become the hugely successful Clean Up Australia Day.

Ian Kiernan and Kim McKay, pictured here in 1999, started Clean Up Australia Day together.
When the government passed on the idea, McKay, still only in her 20s, said to Kiernan: “You’ve got some good mates who are influential. Why don’t we put a little group together? I bet we can organise this.”

“It was a lesson for me early on: if you want to do something, you don’t ever take no for an answer.”

McKay has been refusing to take no for an answer ever since. As well as co-founding Clean Up Australia Day, her CV boasts enough achievements for several lifetimes. She was the co-creator of The Genographic Project, the world’s largest DNA population study. She is the co-author of books such as True Green Kids: 100 Things You Can Do To Save The Planet. She was awarded an Order Of Australia for distinguished service to the environment and the community in 2008.

Then, in 2014, she became the director and chief executive officer of the Australian Museum – the first female director since the museum’s foundation in 1827.

“I’ve always had high energy levels,” she says. “I don’t like doing things by halves.”

Today she is taking a break from her busy schedule to enjoy lunch at her local Italian restaurant, Sagra in Darlinghurst, which is only a five-minute walk from the museum. “This is my carb meal,” she says as the waiter brings us bread, olives and water. “I try and eat my carbs at lunchtime to keep me going.”

She picks the pan-roasted barramundi for her main, I choose the pork leg scallopini with mostarda, and we share the burrata, a type of delicious Italian soft cheese.

The Australian Museum is the oldest museum in Australia and the fifth-oldest natural history museum in the world. It is home to more than 18 million scientific specimens and cultural objects: former generations will fondly remember the 17.4-metre skeleton of a giant sperm whale that was suspended above the previous College Street entrance for 100 years.

As we eat, we look at more of those specimens as we open the official book of “200 Treasures Of The Australian Museum”, a permanent exhibition in the newly restored Westpac Long Gallery. Amid pictures of dinosaurs, mummies, Tasmanian Tiger pups and Captain Cook’s Hawaiian cape, she points out a set of Kiribati armour from the central Pacific.

One of the museum’s Pacific researchers, Yvonne Carrillo-Huffman, discovered that the dark patches on the armour were actually the hair of childless women. “The [islanders] believe once you have a child you give power away to the child. They also believe that women who had not had children kept their power, so their hair adds strength and protection in battle. I quite like that.”

Another piece among the museum’s collection that is dear to McKay’s heart is the Krefft chair, named after Johann (Gerard) Krefft, who was curator of the museum in 1864. According to legend, he was forcibly evicted from the museum by two “prizefighters” while still sitting in the chair.

In the modern era, when directors leave, they are carried out in that very chair.
“Krefft is my favourite of the earlier directors,” says McKay. “He stood up and fought for science when it was under attack. He was an evolutionary theorist, while the trustees were all creationists.

“I’ve created a room [at the museum] to honour Krefft and the story. When I hung his portrait in the room, I said, ‘You gotta look after me.’ ”

Perhaps Krefft’s ghost is looking after her: since she took over four years ago visitations have risen by 20 per cent, which McKay attributes to three main reasons. “I mean, lots of reasons, but one is that we’ve improved it. We built the new entrance. We’ve upgraded all the galleries, including the Long Gallery.

“The second reason is, I think, having kids [under 16] enter free. I think a lot of families are struggling. We appeal to mums and dads and kids right across Sydney.

“The third thing is the rise in tourism. Chinese tourism is rising dramatically. So is tourism from traditional markets like the UK, the USA, Germany. We have a lot of apps in Mandarin and the Chinese visitors are very appreciative of that.”