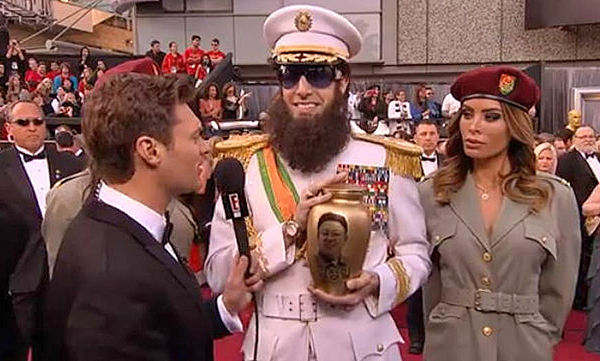 The Dictator’ (2012) by Sacha Baron-Cohen plays on the fact that kitsch is used by dictators and fundamentalists to redefine our world. Zennie Abraham/Flickr, CC BY-ND.

Thorsten Botz-Bornstein, How kitsch consumed the world, The Conversation, 26 September 2017

What is the predominant aesthetic of the twenty-first century? According to sociology professors Ruth Holliday and Tracey Potts, “we are on the point of drowning in kitsch. A casual survey of the British metropolitan high street offers ample evidence of the kitschification of everyday life.”

Kitsch can also be called cheesiness or tackiness. Specialists have defined kitsch as a tasteless copy of an existing style or as the systematic display of bad taste or artistic deficiency. Garden gnomes are kitsch, just like cheap paintings for tourists, which are technically correct but express their “truths” too directly and too straightforwardly, often in the form of clichés.

Some people play with kitsch by using irony, which can lead to interesting results. However, most of the time, kitsch has negative connotations.

In politics, most dictators have attempted to reinforce their authority with the help of kitsch propaganda. The former Libyan leader Muammar Gaddafi was called “the kitsch-dictator‘ and Saddam Hussein, who designed his own monuments in a Stalinist spirit, is one of the few turn-of-the-century leaders able to debate his title. The tastes of the nouveau riches in Russia, China, the Middle East, and the US excel in a kind of conspicuous vulgarity that perfectly matches academic definitions of kitsch.

Terrorism, graphic images of which have invaded our lives in the past two decades, prefers kitsch. Al-Qaeda propaganda indulges in romantic presentations of sunrises, pre-modern utopias, as well as Gothic presentations of skulls and bones. Sociologist Rüdiger Lohlker, who analysed jihadist aesthetics, wrote that the jihadi magazine Al-Qaeda Airlines displayed “a fascination with gothic elements (skulls and bones) and kitsch”.

Videos put out by the so-called Islamic State (IS) offer even more explicit kitsch expressions as they cultivate the art of violence for its shock value.

So why is there so much kitsch? Is there more kitsch now than there’s ever been? A lot of cheesiness has been around in popular religious art, and Caligula is probably the kitsch champion of all times. Enlightenment brought kitsch (then contained in Baroque art) to a temporary halt but it seems that we are catching up again. American screenwriter Kevin Williamson has called Donald Trump in the National Review “the worst taste since Caligula.”

Trump goes back to the pre-Enlightenment taste of Absolutism: his gilded Manhattan penthouse is replete with marble, Louis XIV furnishings, and haphazardly assembled historical themes.

According to my analysis, this attraction for kitsch has to do with the phenomenon of “deculturation” a phenomena in which a particular group is deprived of one or more aspects of its identity“. The term emerged in sociology in debates about the effects of colonialism and subsequent loss of culture, for example in Pierre Bourdieu’s early work Sociologie de l’Algérie.

Humans have always needed truths to believe in. Whereas in the past those truths tended to be transmitted through cultures, they are now increasingly produced instantaneously without cultural mediation. Kitsch employs this mechanism in the realm of aesthetics. In today’s world, kitsch is redefining our perception of truth; it is a truth devoid of culture or context.

The production of immediate, pure, and decultured truths is most obvious in the sphere of fundamentalist religions. Islam scholar Olivier Roy has shown that religious fundamentalism arises when religion is separated from the indigenous culture in which it was embedded.

Studies have shown that kitsch has its roots in an intrinsically narcissistic impulse. That’s why it thrives particularly well in neoliberal environments determined by the dynamics of the information society. Social media are narcissistic because they enable individuals to recycle their own selves without being confronted with the culture of the other.

Algorithms tell us which books we like, based on previous choices. The narcissist structure of this model is obvious. Through algorithms, signs are quantified and classified along the guidelines of abstract forms of excellence. In a decultured world, the self becomes the only remaining ethical reference.

When there is no cultural other, only the “I” will be taken for granted. In the worst case, this system produces self-centered “alternative truths” and conspiracy theories, which are “kitsch-theories” because of their narcissistic, self-confirming structures.

“Kitsch truths” establish themselves autonomously by narcissistically affirming their own truth. Along the same lines, alternative truths and conspiracy theories do not misinform (misinformation being the holding back of an existing truth) but they kitschify truth. In the end, this leads to the total loss of truth.