The Church of Saint George is one of eleven rock-hewn monolithic churches in Lalibela, a city in the Amhara Region of Ethiopia Photo: Alastair Rae.

Historic town, a holy site for millions of Orthodox Christians, caught up in widening Tigray conflict

Forces from Ethiopia’s Tigray region have taken control of Lalibela, a Unesco World Heritage Site known for its churches carved out of rock in the 12th and 13th centuries. The seizure of Lalibela is the latest development in a bloody nine-month battle for the north Ethiopian state of Tigray, which borders Eritrea and Sudan. The conflict has killed thousands and displaced more than 1.7 million people who are now at risk of starvation.

Lalibela, located in the North Wollo Zone of the Amhara region in the north of the country, is a holy site for millions of Orthodox Christians. The deputy mayor of Lalibela, Mandefro Tadesse, told the BBC that the town was under the control of the Tigray People’s Liberation Front (TPLF), residents were fleeing and he was concerned about the safety of the historic churches.

“This is the world’s heritage, and we must cooperate to guarantee that this treasure is preserved,” Tadesse said. “They came in the afternoon [5 August], and there was not any fighting. There were no security forces around. The TPLF forces are in the town now,” a Lalibela resident told Agence-France Presse.

At the ancient site, there are 11 monolithic cave churches; according to Unesco, “their building is attributed to King Lalibela who set out to construct in the 12th century a ‘New Jerusalem’, after Muslim conquests halted Christian pilgrimages to the holy Land. Lalibela flourished after the decline of the Aksum Empire.” 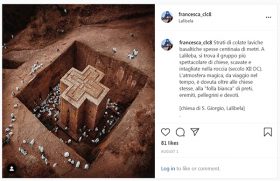 The Tigray conflict began last November, as the world’s attention was focused on the US presidential election. The Ethiopian Prime Minister, Abiy Ahmed, sent forces to attack the Tigray People’s Liberation Front (TPLF), which ruled the country for three decades until he took power in 2018. Eritrean troops joined the fight alongside Ahmed’s soldiers purportedly to hunt down TPLF fighters.

In late June, the TPLF took control of Mekelle, the capital of Tigray; its forces have since pushed east into neighbouring Afar and south into Amhara, where Lalibela is located. Earlier this month, the United Nations (UN) aid chief Martin Griffiths said that Tigrayan armies pushing south have displaced 200,000 people. A UN statement says that more than 5.2 million people across Tigray—more than 90% of the region’s population—require life-saving assistance, including 400,000 people already facing “famine-like conditions”.

Numerous reports earlier this year suggested that cultural sites in Tigray were being targeted with international experts warning that “cultural cleansing” is taking place. The sixth-century, clifftop Debre Damo monastery was bombed and then ransacked after Eritrean soldiers scaled an 80ft cliff to reach it before removing precious manuscripts from the building. The monks’ ancient dwellings nearby were destroyed.