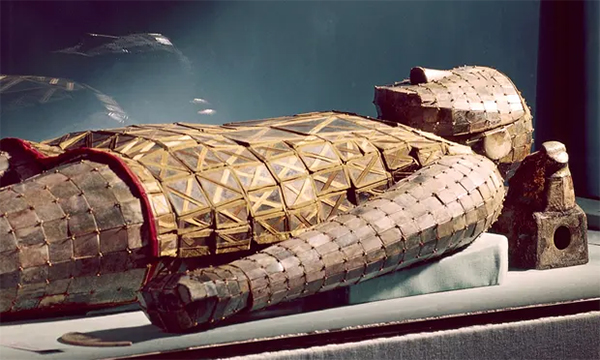 From a pliosaur skeleton now known to Australian museumgoers as Eric to the basalt that built Robert Smithson’s almighty Spiral Jetty, these are stones that really speak.

Stones have shaped culture for as long as culture has existed. Their uncanny shape has led us to tell stories – of trolls disguised as boulders, of maidens cursed for dancing on the sabbath, of a snake-haired woman whose eyes petrified. They have provided us with tools, from axe heads to the rare minerals used in camera phones. And they have served as signifiers of power and wealth, often derived in turn from mines and the trade routes that distribute their riches.

We think of stone as something stable and unmoving, but that’s just a matter of the timescale by which you look at things. My new book, Lapidarium: The Secret Lives of Stones, contains 60 stories, each about a different stone. Here are 10 memorable rocks that roll across its pages … 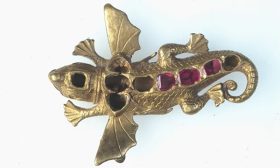 In 1967 underwater archaeologist Robert Sténuit led an expedition in the surging icy waters near Lacada Point, off the Northern Irish coast, recovering objects from the wreck of the Girona, a galleass that went down in 1588. Sténuit’s team found gold, coins and guns – but also a great quantity of jewellery. The Girona had been part of the Spanish Armada, and had the invasion gone to plan, the gems would have shone from the conquerors’ robes as they sailed into London in triumph. This ruby pendant was once an emblem of Spain’s power and reach. The salamander design is inspired by the axolotl – an amphibian creature venerated by the Aztecs – while the rubies come from Burma. Rubies were believed to glow with inner light, and salamanders to live in fire: an auspicious pairing for a talisman worn into battle. 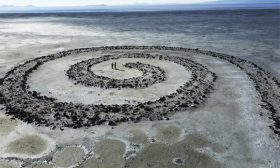 In 1970, a contact on the Utah Parks Department told artist Robert Smithson that north of Lucin Cutoff, the water of the Great Salt Lake had turned the colour of tomato soup. For an artist whose material was the landscape itself, this was an irresistible lure. With his wife, artist Nancy Holt, he flew to Utah, and drove around the lake to select a site for a work composed from the earth, water and sky. Spiral Jetty was imagined as a whirlpool, vortex, galaxy, and the spiral of geological time twisting out of sight. The work is almost half a kilometre long, constructed from 6,650 tonnes of local black basalt. Over the years it has disappeared and reappeared as the height of the water fluctuates: part of the ecology of the lake, this rough, rocky structure is now dressed in a carapace of salt crystals. 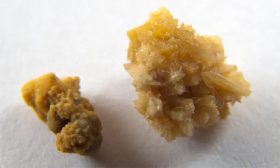 We think of stone as inert, set apart from the animal kingdom, but it can also form fast – just look inside your kettle. Stony concretions (calculi) also form inside the body: gallstones in the gallbladder, nephroliths in the kidneys, cystoliths in the bladder, enteroliths in the gastrointestinal tract, rhinoliths in the nasal passages, and so on. These calculi were collected by the eminent British crystallographer, prison reformer and peace campaigner Kathleen Lonsdale. In 1962, Lonsdale was approached by the Salvation Army for help analysing bladder stones removed from children in India. Lonsdale’s pioneering study, published in Science magazine in 1971, opens with the thigh-clenching revelation that “the largest human stone recorded weighed over 1.36 kilograms.” 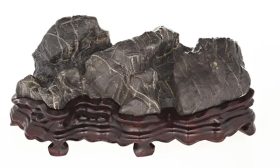 For collectors, the most highly prized of China’s dramatic rocks is the gongshi – known in English as a “scholar’s rock” or “spirit stone” and in Japanese as suiseki – an object of evocative, dynamic form used as a focus for contemplation. Placed on carved wooden stands that hold them steady in their most captivating position, gongshi can be small as a thumb or tall as a teenager. Historically, the most valuable gonshi are Lingbishi (Lingbi stones): tortured, twisting fragments of fine-grained limestone from Lingbi county in the north of Anhui province. 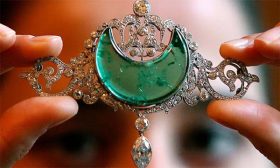 Emerald and diamond brooch (c.1910) once property of the maharani of Kapurthala

The maharani of Kapurthala’s favourite jewel was a crescent emerald which she spotted on her husband’s oldest elephant. Portraits of this legendary beauty show her wearing the enormous stone just as the elephant had, on her forehead. The Maharaja Jagatjit Singh of Kapurthala fell in love with the Spanish dancer Anita Delgado Briones at first sight (as per fairytale convention) when he saw her perform at the Gran Kursal cabaret in Madrid. After accepting Jagatjit Singh’s proposal Anita submitted to the full Pygmalion treatment, learning to skate, ride a horse, play tennis, billiards and the piano. She acquired several languages and was rigorously schooled in etiquette before her marriage. The coveted crescent-shaped emerald was presented on her 19th birthday as a reward for learning Urdu.

For Barbara Hepworth, stone was not an inert substance: she responded powerfully to the material itself, its particularities and associations. Mother and Child is carved in pink Ancaster, a compact oolitic limestone from Lincolnshire used predominantly as a building material: a practical British stone. Mother and Child is in two parts: the “mother” is rounded like an old mountain, with a valley forming her lap. In this stands the small figure of the ‘child’, independent, yet close, leaning in toward her. Hepworth offered a new interpretation of an ancient subject – one for an era of progressive relationships and Freudian psychoanalysis – two individuals, cut from one stone, but ultimately separate.

Since the 19th century, Australia has been the world’s primary source of opals. The most valuable are black opals from Lightning Ridge, their shadowy depths shot through with iridescent fire the colour of malachite and lapis lazuli. Mined since 1915, Coober Pedy remains the greatest source of opals by volume, but the market is shifting. In 2008, Ethiopia emerged as a new source for opals of exceptional limpidity and play of colour. Opals are composed of spheres of silica eroded from sandstone, carried downwards by water through faults and cracks until they reach an impermeable layer where they pool and lithify. Sometimes the faults invaded by the silica-rich water are those formed by plant or animal remains, which are slowly transformed into opalescent fossils. In 1987, a miner at Coober Pedy found the fully opalised remains of a pliosaur, dubbed Eric. 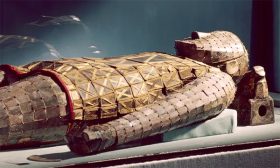 Nephrite is the jade of ancient China – a stone more precious than gold, the durability of which served as a material connection to a person’s ancestors, and suggested indomitability and the endurance of personal legacy. The practice of carrying jade into the afterlife was elaborated in the Han period (202 BCE–220 CE). Early members of the Liu family, their consorts, and the high-ranking elite were buried in full suits of jade, made from interlinked plaques of stone. Before the body was placed in the tomb, its nine orifices were first sealed with jade plugs. Jade was thought to promote longevity and would thus protect the body from decay. 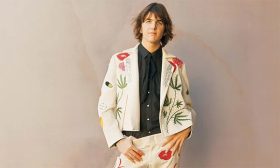 In 1913 a kid called Nuta Kotlyarenko left Kyiv and had his name mangled by US immigration. By the 1930s, he was crafting rhinestone-encrusted G-strings and nipple pasties for New York’s burlesque performers. The following decade, as Nudie Cohn, he moved to Hollywood and took his rhinestones with him. Faceted synthetic crystals were a phenomenon of the late 19th century, and on stage, under electric lights, they were mesmerising. Nudie’s Rodeo Taylors peddled a dazzling peacock style for men that by the 1970s made the term “rhinestone cowboy” synonymous with music stardom. In 1969 Rolling Stone portrayed Gram Parsons in his white Nudie suit, the front and sides splashed with rhinestone outlines of the hemp leaves, opium poppies and barbiturates that would carry him off four years later. 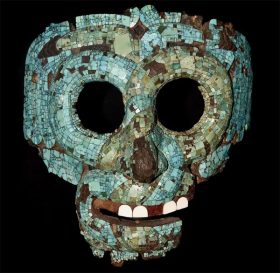 The storm god Tlāloc is a blue-faced divinity associated with fertility and water. Gummed on to a wooden base, two different shades of turquoise describe a pair of serpents that form the god’s face, criss-crossing one another at the nose and ringing the eye sockets. The Aztecs valued turquoise as highly as the Spanish valued their gold. In Náhuatl the word for the blue stone is xihuitl and it was synonymous with the quality of preciousness, used admiringly as one might use “golden” in English – a turquoise child, turquoise words. According to the Codex Mendoza, three provinces in Aztec territory had to pay tribute to the emperor in turquoise: beads and mosaic tiles were tantamount to a form of currency.