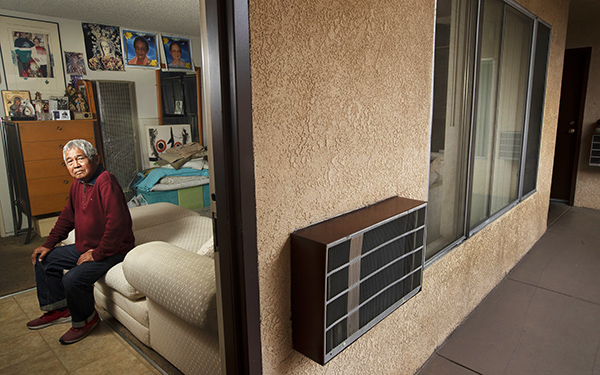 L.A.’s most devoted museum fan, Ben Barcelona, is stuck at home while all the museums are closed due to the coronavirus outbreak. (Mel Melcon / Los Angeles Times).

Last July, on a brilliantly sunny morning, the Los Angeles County Museum of Art’s outdoor plaza was teeming with visitors. The buildings on LACMA’s campus were about to open, and 80-year-old Ben Barcelona was at the ready. It was a Thursday and Barcelona is always one of the first visitors to step inside on Thursdays.

In a striped Oxford, jeans and running sneakers, a floral tote slung over his shoulder, Barcelona cut through the crowd playfully snapping selfies at the museum’s “Urban Light” installation. He rushed past a bustling coffee cart, stopping at the Broad Contemporary Art Museum building, where he hovered by its locked doors.

Barcelona checked the time on his cellphone, the back of which revealed a virtual portal into his life: layers of colorful museum membership stickers — the Museum of Contemporary Art, the Hammer Museum, LACMA, he belongs to them all.

“It’s 10:58. The doors are gonna open in a minute!” Los Angeles’ most devoted museum-goer announced, his sense of urgency transparent.

For eight years the retired architect, who immigrated to Los Angeles from the Philippines in 1969, had been visiting a different art museum, gallery or public art installation every day of the week, rarely, if ever, deviating from his routine. MOCA on Mondays, the Broad on Tuesdays, the Hammer on Wednesdays, LACMA on Thursdays, the Getty on Fridays. On Saturdays he made the rounds at “museum quality” galleries; on Sundays, he visited the Cathedral of Our Lady of the Angels, a building he considers an artwork unto itself. On national holidays when museums are closed, he visited public artworks. He’d never taken a sick day from art, he said.

Barcelona’s admittedly obsessive routine has not only kept him mentally engaged and physically fit, he said, but it has provided him an “out-of-the-house living room,” an escape from the cramped Koreatown apartment he shares with two roommates. It has also provided an emotional lifeline. The city’s museum workers — gallery attendants, security guards, educators, ticket booth clerks, retail staff and others — have been like family to him; the artworks and the institutions themselves, his greatest source of comfort and inspiration, his oxygen.

“The museum is my home,” Barcelona said on that July morning. “The whole place, it keeps me alive.” 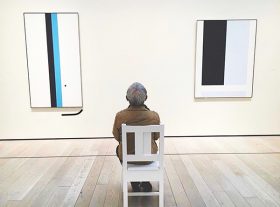 Barcelona has lived in Los Angeles for 49 years, a city he cherishes for the quality of its light. He met and married his wife here; their daughter, Kristina, was born here; he worked for five different architecture firms here, helping to design shopping malls and department stores.

Then in 1992 Barcelona’s wife, Divina, died from lupus. He switched gears, taking a less demanding job so he could spend more time caring for his 8-year-old daughter. While he grieved, he made monthly pilgrimages to LACMA to visit George de La Tour’s “The Magdalen With the Smoking Flame,” to his eye the single most beautiful painting in the museum. The flickering candlelight and wisp of smoke, the draping, velvety shadows, engulfed him.

The painting was an altar of healing. It reminded him that “there is beauty, but there is also ending. That life is temporary. Young or old, you never know.” 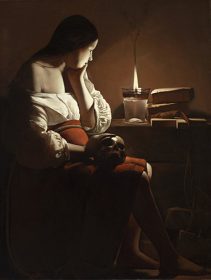 When he retired at 73, Barcelona began his daily museum-going ritual. His multi-year art odyssey was uninterrupted until the middle of March, when the coronavirus outbreak forced nearly every cultural institution in California to shutter its doors.

The void in his life is palpable, but his spirit is indomitable.

“Oh, my God, this coronavirus…” Barcelona says late last month, as he answers the phone. “And the museums are all closed! And there’s no toilet paper!”

Barcelona is self-quarantining, getting by on fast food and sandwiches he makes at home. “But I’m doing all right,” he says, oddly calm. “It’s our new reality.”

He’s filling the museum vacuum by poring over books about art in his bedroom — currently “The History of Modern Art” and a book about MOCA architect Arata Isozaki — and watching interviews with artists on YouTube via an old iPad.

Hammer Museum curator Aram Moshayedi has emailed Barcelona, sending materials to read and listen to as sustenance. “His routine, all these museums, suddenly taken out from under him,” Moshayedi says. “Just to imagine how he’d be spending his days — I was definitely concerned.”

Barcelona misses chatting with the millennials he meets on his outings, “like-minded people” who make him feel young; he misses the texture of original works on canvas; he misses untitled paintings, because they mirror his open-minded thinking; he misses riding the bus to museums where, as a member, he bypasses admission fees; he misses the skylights at the Broad and the Getty Center’s architecture, where even the tree-pruning is artful.

Barcelona’s fitness tracker no longer boasts roughly 18,000 steps a day either, as it did when he was on his museum-going regimen. But he still takes daily walks in his neighborhood, hand sanitizer stuffed in his pocket.

“I see people looking depressed, stressed, as I walk,” he says. “But, you know, it’s living art.” 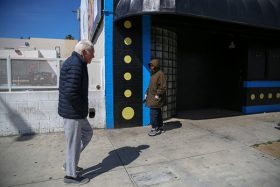 Ben Barcelona, right, on one of his daily walks through Koreatown, several days after Californians were ordered to shelter at home.(Dania Maxwell / Los Angeles Times).

If museums are town squares of sorts, refuges for the culturally curious and those seeking shared spaces and connections, then Barcelona is one of those town characters whom everyone knows.

Last October, during one of Barcelona’s Wednesday morning visits to the Museum of Contemporary Art, he was quickly greeted by a security guard who said: “You again! Hey, man. How are you?”

Moments later, when a passerby asked the guard: “Where’s the bathroom?” Barcelona jumped into the conversation, pointed and answered: “Oh, across there and downstairs.” It was not intended as an affront— the man simply knows his way around.

Barcelona was there to see “With Pleasure: Pattern and Decoration in American Art 1972-1985,” an exhibition he would visit over 19 consecutive Mondays. His museum trips are short and focused, no more than an hour and a half, but he returns to exhibitions over and over again “until I fully understand,” he said. “I become familiar with the brushstrokes, the color, I go inside — it’s not just seeing once and it’s done.”

His repeat visits, over prolonged periods, have given him a unique bird’s-eye view of the contemporary museum world.

Meandering through the exhibition, Barcelona was animated as he made connections between artists, works and institutions. Observations — and bits of gossip — flowed steadily, unprompted.

Hurrying into the gallery: “These artists who do patterns and decorations, it’s like a revolt against the minimalists!”

Rounding a corner: “Oh, that’s Frank Stella. You can tell by the shapes and the forms.”

‘I want to live my life fully, to love fully, instead of just existing. I try to enjoy every moment — and those moments, for me, are understanding art.’ Ben Barcelona.

A female gallery attendant noticed Barcelona and headed over. “Everyone knows Ben!” she said, tossing an arm over his shoulder. He stood stiffly, arms at his side — but he was grinning.

These interactions, for Barcelona, are part of the art experience.

“Life is art, it’s connections,” he said. “I want to live my life fully, to love fully, instead of just existing. I try to enjoy every moment — and those moments, for me, are understanding art.”