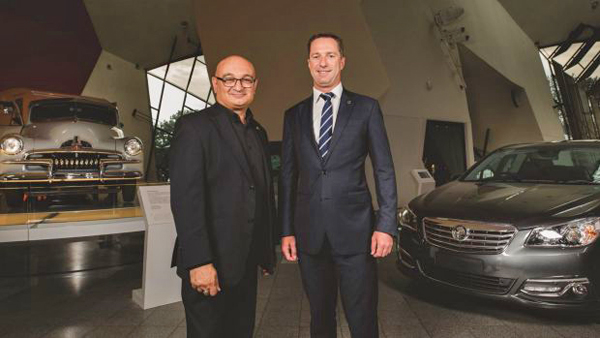 One of the last vehicles to roll off the Holden production line in Australia has joined the National Museum of Australia‘s historic car collection.

The Holden VFII Calais, which was manufactured at the General Motors Holden factory in Elizabeth, South Australia, on October 13, marked the end of Australian-made car manufacturing.

The four-door sedan joins the National Museum’s historic collection of Holden vehicles, which includes the Essington Lewis’s 1948 48-215 model, which is also known as the FX, and which is believed to be the first Holden sold commercially.

Holden chairman and managing director Mark Bernhard said the Calais donated to the Museum “celebrates the Holden manufacturing journey and the special place Commodore holds in the hearts of many Australians”.

“The pride, passion and quality of workmanship delivered by our people at Elizabeth has meant our last Australian-built cars including this Calais are the best and most technologically advanced vehicles ever made by Holden in Australia,” Mr Bernhard said.

National Museum director Matthew Trinca said that although it was sad to the see the end of local car production, the museum was proud to include the Calais as part of the story of car manufacturing in Australia.

“It is undeniable that General Motors Holden, and the Holden name even before General Motors, is actually synonymous with Australian history since the middle of the 19th century,” he said.

“I think that it is important for the National Museum which is focussed on the Australian story to include Holdens, with its symbolic effect over Australian life over the course of 150 years or more.”

Holden’s director of design, Richard Ferlazzo, said the day marked the culmination of auto industry manufacturing in Australia and it captured the expertise, design and engineering in Australia.

“We have 150 talented designers in our department, and what really captures the imagination in the Calais is its proportion and its stance, which is what Australians really like in their vehicles.”

“It has a very solid stance on the road, the tires that sit nice and squat, it has a purposefully look about it and that is something in the Australian culture that we have captured.”

“Australians are very much car people and because of our vast country, we enjoy mobility and cars represent the freedom of mobility, which is why we have embraced it so much.”

The Holden Calais will be on display at the National Museum over the Australia Day weekend.

Positions Vacant » View All
» Risk & WHS Manager – Australian Museum
» Project Coord, Castle Hill Consolidation – MAAS
Latest News » View All
AAS, CE Anna-Maria Arabia awarded honour
- Knight of the Order of the Star of Italy Read more.
HTSA – Instants & Places of the Italian Front
- Knight of the Order of Vittorio Veneto Read more.
Royal Pavilion & Museums restructure follows
transfer to independent business & charity Read more.
Just like museums, libraries aren’t neutral
- a perspective on the catalogue Read more.
Igorot axe seized & restored to Philippines
via ABF, OFTA, DFAT et al collaboration Read more.
Top +
Council of Australasian Museum Directors, c/o Ms Daryl Karp, Museum of Australian Democracy at Old Parliament House PO Box 3934 Manuka, Australian Capital Territory 2603 Australia, © CAMD 2021
Copyright: All information and resources provided on this website remain the copyright of the Council of Australasian Museum Directors. Permission is granted for viewing and downloading for personal and not for profit purposes. Those wishing to reproduce any materials for commercial, educational or other uses are requested to contact us.
Disclaimer: The content of this website is provided for information purposes only and is not intended as a substitute for professional advice. No claim is made as to the accuracy or authenticity of the content of the website. The Council of Australasian Museum Directors does not accept any liability to any person for the information or advice (or the use of such information or advice) which is provided on this website. The information on our website is provided on the basis that all persons accessing the site undertake responsibility for assessing the relevance and accuracy of its content. No responsibility is taken for any information or services which may appear on any linked web sites. Hostgator.
.