You are here: Home » Articles filed under: 'News' » Article: 'Learning from the Past'

Learning from the Past

May 11th, 2015 | Browse other: News. | Tagged with: Indigenous Australia — Enduring Civilisation, Learning from the Past, The Biggest Estate on Earth | 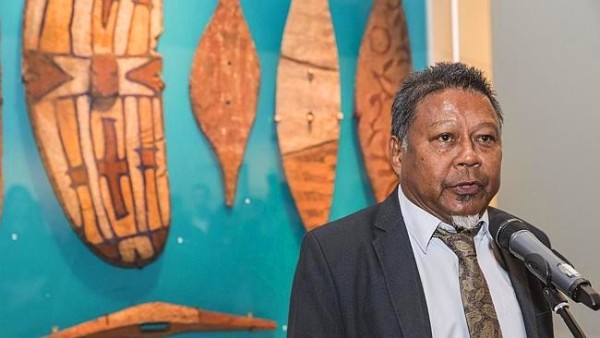 Peter Yu, Artefacts help us plot future course by learning from past, The Australian, 4 May 2015

In 1770 when James Cook raised the Union Jack at Botany Bay, claiming the whole of eastern Australia for Britain’s empire, he carried with him instructions from King George III that said “take possession of the Great Southern Lands with the consent of the natives”.

In the Indigenous Australia — Enduring Civilisation exhibition, opened by Prince Charles at London’s British Museum on Thursday, there is a shield that once belonged to a Gweagal traditional owner, who held it at the time of the first encounter between Aboriginal people and Cook’s party. The shield has a hole at its centre, and when I first saw it last year I wondered if this was evidence of the exchange of spears and gunfire that marked that first meeting.

The process of engagement got off to a bad start and never recovered.

Over the next century and a half, frontier wars and violent dispossession created the Australian nation state. A legal justification for indigenous peoples’ dispossession was given the term “terra nullius”, meaning that the lands belonged to no one before the British arrived. It was only in 1992 that the High Court of Australia ruled that terra nullius was a legal fiction, describing the exploitation and appropriation of indigenous people as “a national legacy of unutterable shame”.

The Indigenous Australia — Enduring Civilisation exhibition tells this story as much as it tells the story of a unique civilisation that managed the environments of a vast landscape immaculately described by Bill Gammage in his book The Biggest Estate on Earth, awarded the 2012 Prime Minister’s Prize for Australian History.

It is now understood that so much of Australia was immensely attractive to British eyes for its ability to pasture livestock and grow crops because it was so carefully and sustainably nurtured by the indigenous owners for tens of thousands of years. Given this, it is understandable why the exhibition has provoked wide-ranging debate.

Many indigenous people and supporters demand that indigenous property held by the British Museum be repatriated to the descendants of those who once owned it. I deeply respect that view and support the right of people to make that argument. But to move forward and advance the interests of Aboriginal and Torres Strait Islander peoples requires sophisticated dialogue.

We must move beyond the rhetoric of demanding urgent repatriation as a means of redressing historic injustice. This should not be confused with the unequivocal and necessary return of human remains to their rightful resting place back home in their country.

A mature discussion would ­appreciate that repatriation is sensitive and problematic. Contemporary indigenous ownership of the material is often not clear and in all honesty we should not shy away from this; rather we should challenge ourselves on how to retrieve the situation. This reality must be recognised. Aboriginal societies, like other societies universally, have wide and diversified views on all things and during the community consultation process many views were expressed.

Members of the Noongar community in the southwest of Western Australia said “we want the trustees of the British Museum to write to us and thank us for allowing them to be the custodians of our material”. But they also sought to have the material visit their community so that they could pay their respects to their ancestors by connecting with the objects, learn from them and teach their children about their design, technology and cultural heritage.

A traditional owner community group in the NSW town of Lismore was inspired by the photographs of the woven baskets and designs originating from their ancestors to develop contemporary costumes based on traditional themes and run a fashion parade.

The holding and displaying of these collections is far more than an institutional matter pertaining to the roles and responsibilities of the British Museum and the National Museum of Australia, which worked jointly on the project. It is part of reconciling the unfinished business of the legacy of Australian settlement by the British crown.