The new exhibition, opening in Liverpool in October, was a hit in Australia where many of the 100,000+ British child migrants were sent between 1869 and 1967.

The story of Britain’s child migrants will be told in a new exhibition opening at the Merseyside Maritime Museum this autumn.

In the century between 1869 and 1967, more than 100,000 children were sent to Commonwealth countries including Canada and Australia as part of child migration schemes backed by governments.

And Liverpool, along with Glasgow, was one of the main departure points for youngsters, with the city’s Allan Line carrying almost half of Canada’s child migrants on its ships.

On Their Own: Britain’s Child Migrants, opening at the Albert Dock museum on October 17, is a collaboration with The Australian National Maritime Museum, based in Sydney’s Darling Harbour.

It has already toured Australia, where more than 350,000 people came to see it.

Some of the children involved in the migrant scheme were orphans, while others came from families who were unable to care for them.

At the time, charitable and religious organisations sent them overseas, with the belief that their lives would improve as a result.

But it was often heartbreaking for the youngsters involved, many of whom were used as cheap labour by the countries they were sent to, and who were often split up from their friends and brothers and sisters.

On Their Own: Britain’s Child Migrants tells their stories through detailed case studies with the aim of giving visitors an insight into their experiences.

Ellie Moffat, curator of maritime collections at the Maritime Museum, said: “This exhibition tells the story of a significant chapter in our county’s history, and so from the start we felt very strongly about collaborating with the Australian National Maritime Museum, to bring it to the attention of a wide audience.

“And Liverpool was one of the main ports of departure for children being sent to Canada.”

It runs from October 17 until October next year. 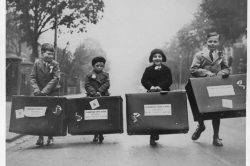