You are here: Home » Articles filed under: 'News' » Article: 'Lego Colosseum release – is it a match for'

Lego Colosseum release – is it a match for

December 3rd, 2020 | Browse other: News. | Tagged with: Build your own Colosseum!, Lego model of the Colosseum |

Introducing Rakewell, Apollo’s wandering eye on the art world. Look out for regular posts taking a rakish perspective on art and museum stories.

‘Once the largest amphitheatre in the world. Now the largest LEGO set ever.’ Thus the beguiling brick merchants at Lego are marketing their new model of the Colosseum, which includes 9,036 pieces, ‘reproduces original features like travertine paving stones and olive trees’ (in Lego) and will set armchair architects back a mere £449.99. The great Flavian amphitheatre is reproduced as a ruin, with the hypogeum structure that would have been concealed beneath the floor of the arena visible – as it is at the Colosseum itself today. No miniature plastic gladiators or Christian martyrs here!

This scaled-down stadium prompts your correspondent to ponder further hand-crafted colosseums. In the 18th century, cork models of the building and other classical structures were popular as Grand Tour souvenirs and teaching models. Among those of the Colosseum to survive is one of Richard Du Bourg’s models, likely the original, which he exhibited in a ‘Classical Exhibition’ in London from 1775 onwards. It is now in the collection of Museums Victoria. 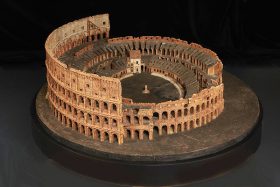 ‘Cork was a particularly suitable material for capturing the decayed character of classical architecture,’ the collection’s website states. ‘The modellers augmented the cork with plaster and sand for the landscape and moss for vegetation.’ All of which puts Rakewell in mind of the late Huang Yong Ping’s Colosseum (2007), a playful sculpture in which the terracotta arena, more than two metres high, is livened up with an array of plants: the Colosseum reimagined as a gigantic flower pot.

Elsewhere there have been matchstick colosseums, chocolate colosseums, even a colosseum carved from a wheel of Parmesan cheese. Wonders of the world, each and every one of them.