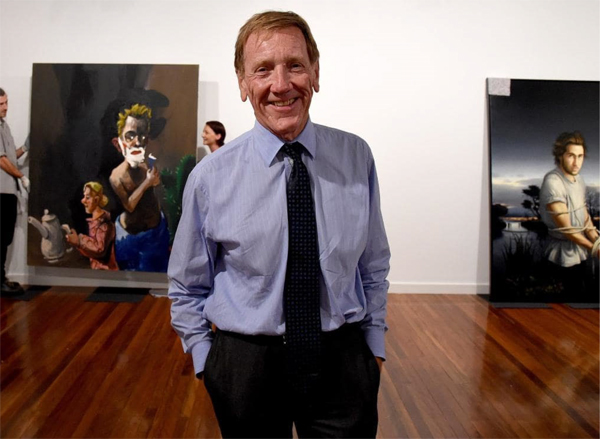 Capon pictured in 2015 when he was a judge for the Doug Moran Prize.

When Premier Neville Wran announced in 1978 the appointment of Edmund Capon as the new director of the Art Gallery of New South Wales there emerged, as too often happens in this culture-averse country, the usual clutch of naysayers. “Edmund who?” “Not another Pom’’, “A blow-in from the V and A.” How wide of the mark they were.

Within months Capon had put his critics to flight and for the next 30 years he reigned as the very model of a modern gallery supremo.

Make a list of the qualities one would want, nay expect, in the boss of a major national cultural institution. Knowledge, intelligence, leadership, diplomacy, passion, erudition, charm, wit, grace, good manners, and an absence of pomposity and you’d find Capon would tick all the boxes. Then try to find another arts leader to match Capon’s tally. Good luck.

I first met Edmund and Joanna Capon one sunny afternoon at a National Trust outing at the Norman Lindsay Gallery at Faulconbridge in the Blue Mountains. We seemed to hit it off immediately and were soon on sufficiently good terms socially to dine at each other’s houses on a fairly regular basis.

But in 1997 we forged a more important bond. I had returned to Sydney from Melbourne where I’d spent three years at the helm of that city’s annual arts festival. A neophyte to the festival game, I quickly learned that any good performing arts festival needs a complimentary visual art component so I called on Capon to ask for his support. Formalities took about five minutes and the answer was positive. So chalk up another quality needed in any arts leader but rarely encountered – collegiality. He was the most generous of colleagues and an enthusiastic booster of every commendable enterprise.

He and Joanna enjoyed the opera (a group of fellow aficionados travelled together to San Francisco to see and hear the Ring cycle), attended the theatre but he was never a cultural snob, always up for a good laugh and had some delightful eccentricities — by the ‘loo in their ever-welcoming family home in Bellevue Hill was to be found a basket containing a stash of back numbers of Private Eye.

His scholarship, which in the sphere of the arts of Asia was profound, was worn lightly, never flashed.

In this celebrity-besotted age, many an institution is characterised by its leader and few are suited to the dual role of ringmaster and media performer. Capon was both scholar and showman, open to ideas and accessible to all comers, from the blokes in the packing room to the heads of great international corporations, from donors, to duchesses to dinky-di Aussies. Remember when he invited every taxi driver in town to pop into the Gallery for a private viewing of a Picasso blockbuster?

News of his illness (he was battling melanoma) was whispered at a memorable lunch given by Peter and Doris Weiss in their beautiful house on Pittwater but, given his sunny presence that afternoon, no one would have guessed his condition.

I can’t think we will look upon his like again, certainly not in a hurry. But we should cherish the three decades we had his sparkling presence in our midst.