You are here: Home » Articles filed under: 'News' » Article: 'Lessons of Palmyra' 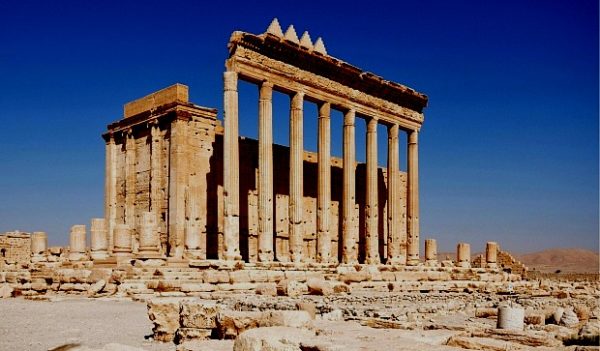 Isil broadcast dramatic destructive acts to the world last summer, when it detonated the Temples of Bel (above) and Baalshamin along with the Arch of Triumph in quick, choreographed succession. Photo: Daniel Lohmann.

Jason Felch, Bastien Varoutsikos , The lessons of Palmyra: Islamic state and iconoclasm in the era of clickbait, The Art Newspaper, 7 April 2016

As Syrian troops drove the Islamic State out the ruins of Palmyra on Sunday, the world held its collective breath to see what was left of the World Heritage Site.

Detailed damage assessments are on-going, and early indications are mixed. The Palmyra Museum appears to have been hit by both artillery shells and acts of vandalism, with the faces or heads of some 20 statues hacked off in attacks that may have been motivated by the Quranic sin of idolatry, known as shirk. It also appears that five previously unpublished tower-tombs have been at least partly damaged.

The broader archaeological site, on the other hand, appears to have been largely spared after the dramatic destructive acts that Isil broadcast to the world last summer, when it detonated the Temples of Bel and Baalshamin along with the Arch of Triumph in quick, choreographed succession.

Today, we know that the site’s majestic amphitheater, rows of columns and other iconic ruins were laced with explosives by Isil, but ultimately spared.

These early assessments contain several important lessons for those of us who watched the destruction of Palmyra in horror last summer—and then shared it virally on social media.