You are here: Home » Articles filed under: 'News' » Article: '‘Libraries are about being together.’'

‘Libraries are about being together.’ 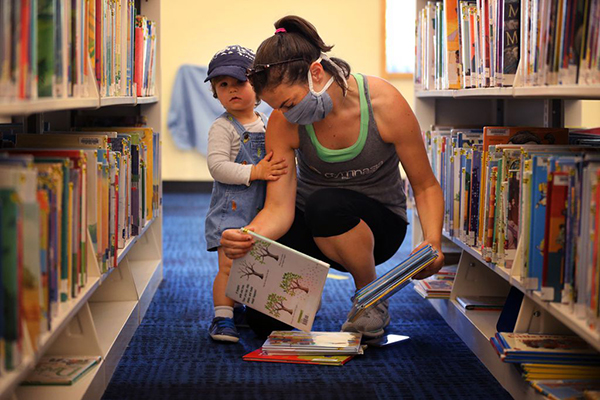 Antonella D’Eramo, with son Elio, “was so happy I could cry” when she heard the Watertown Free Public Library reopened. Craig F. Walker/Globe.

Tim Logan, ‘Libraries are about being together.’ So what do they do now?, Boston Globe, 10 August 2020

Brian Adams loves libraries for the books they hold, but also for the sense of community they create, something that feels more precious than ever these days.

His grandmother was a small-town librarian in Western Massachusetts, and as his career has taken him around the world, one of his first stops in a new city has always been the library. For him, getting that card is like gaining membership to a new home.

So last summer, when the public library in his current home of Watertown hosted a reading for Susan Orlean — renowned author of “The Library Book,” a bestseller about, well, libraries — Adams just had to be there.

“They had a potluck dinner and this huge sheet cake. Everyone could show up,” Adams said. “It had that feeling like we all should get to know each other.”

This summer, of course, it’s been a different scene at libraries across the state.

Like so many other institutions, they are trying to sort out their safe and productive place in this pandemic world. Many have launched virtual programming — putting children’s storytime online, for instance. Most have started lending again, usually with curbside pickups. In recent weeks, a few — Milton, Watertown. and Woburn among them — have gingerly reopened for in-person browsing and borrowing.

But with books and magazines so easily downloaded, libraries in recent years have come to be about far more than their traditional stacks and shelves. Many offer services that range from yoga classes for kids to movie streaming to help with job searches to simply offering a place where someone can sit and read a magazine in peace. 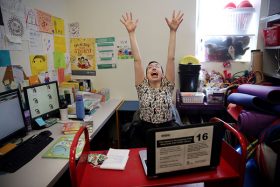 And as architect Scott Pollack notes, they’re rare public spaces that are truly free and open to all.

“Libraries are our 21st-century community centers, and they’ve become really, really important to our communities,” said Pollack, a principal at the Boston architecture firm Arrowstreet. “It’s going to be hard for them to do that for a while.”

Since the lockdowns of March, libraries have been trying to figure out ways to keep filling their many roles.

Some libraries cranked up their Wi-Fi systems, so patrons in the parking lots could get online from their cars. Others started video programs they would never have held in person, such as the Woburn Public Library’s weekly how-to sessions with a hair stylist.

“We’re humans. We’re looking for different ways to connect, and signal that we’re all going through this together,” said Bonnie Roalsen, director of the Woburn Public Library. “It’s not just sending out book lists.” 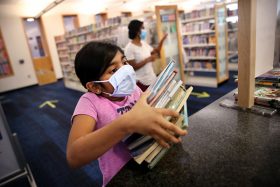 Still, it all depends on Internet access, and not everyone has it. Indeed, many patrons go to libraries specifically to use the Internet — to do schoolwork or look for a job or print out documents from websites.

While there, they’ll often get help from librarians who double as experts in everything from online research to resume writing. That kind of interaction is hard to replicate remotely, said Rob Favini, head of library advisory and development at the Massachusetts Board of Library Commissioners.

“There’s really a digital divide here, and this exacerbates it,” he said. “To a lot of folks, it’s the building that’s so important.”

That’s especially true in lower-income neighborhoods around Greater Boston, said Greg Peverill-Conti, co-author of the blog Library Land, which celebrates Massachusetts libraries. Many of those neighborhoods, he notes, have been hit especially hard by the COVID-19 pandemic, and the economic crisis it has sparked. People will need access to job training, social services and the many other functions libraries perform beyond simply checking out books.

“A lot of libraries are thinking about their civic role a little more, and how they might help people coming out of the pandemic,” he said. “They’ve always done that stuff, but will need to do it 10 times more at this point.”

As summer rolls on, some libraries have started welcoming people back to their buildings at reduced capacities, as allowed under Phase Three of the state’s reopening plan. There’s no official list, but the Board of Library Commissioners says it knows of about 20 libraries around Massachusetts that are open for at least some in-person services, often with restrictions.

Milton, for instance, is letting patrons in for 20 minutes at a time. The Woburn Public Library reopened Aug. 3, with plans for some group programming on its huge front lawn. At the Watertown Free Public Library, which opened in late July,patrons have to sign a contact-tracing slip at the front door, furniture and computers are roped off, and hand sanitizer is everywhere. 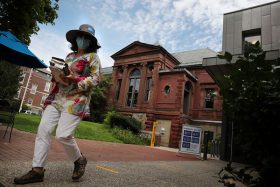 Still, it’s good to be back in business, said Watertown’s library director, Leone Cole. Even if foot traffic is well below normal, patrons seem genuinely happy to be able to browse the stacks and chat with the librarians. But she laments what they can’t do. There are no in-person events, no computers, no seating. Normally during the simmering summer weather, she’d see people who apparently had nowhere else to go come in just to cool off. She’s not sure where they go now.

“I’ve been thinking about that during this heat wave,” she said. “It feels bad to me that we can’t be there for that, but we just can’t right now.”

Adams said he hasn’t been back to the Watertown library, though he has picked up books at curbside and went to the summer book giveaway to find something suitable for his 6-month-old son. He’s looking forward to the day when he can take him to readings and other events. But it’s the routine visits he misses most, the kind that were easy to take for granted before the virus arrived.

“It’s like seeing an old friend you haven’t seen in awhile,” Adams said. “You just feel better when you’re in a library.”

That’s something Orlean has been thinking about, too. Unlike last year, when the author — who wrote for the Boston Phoenix and Boston Globe Sunday Magazine in the 1980s — actually came to Watertown, her readings this summer have been virtual affairs. That sense of community that libraries engender, which she wrote about in her book, is harder to foster online. And the serendipity of being able to drop in, browse, and discover something new — be it a book or a person — is, at least for now, a thing of the past, no matter how creative libraries get.

“I don’t think there’s another version of that,” Orlean said. “Libraries are about being together. And being together is something we’re really grappling with right now.”