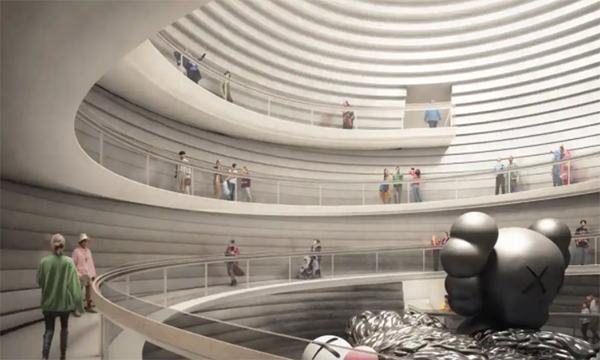 The design for the National Gallery of Victoria’s new contemporary space. Billionaire Lindsay Fox and and his wife Paula have donated $100m to the project. Photograph: Render by Secchi Smith/Angelo Candalepas and Associates.

A former curator praises donation for The Fox: NGV Contemporary to make up for public funding shortfalls.

A former curator of the National Gallery of Victoria has welcomed a $100m donation from the Fox family to help fund the construction of its new contemporary art space, saying philanthropy is needed to make up for a shortfall in public funding.

The Andrews government on Tuesday announced the new gallery would be named The Fox: NGV Contemporary, to reflect the donation by billionaire trucking magnate Lindsay Fox and his wife, Paula.

It is the largest ever gift made to an Australian gallery of art museum by a living donor, and builds on the $20m donated by the Ian Potter Foundation in 2020 for the same project.

Charles Green, a professor of contemporary art at the University of Melbourne, noted the city had a “great history of civic donations” which were essential in supporting the arts.

“Philanthropy has to be there in the absence of really visionary or even sustained funding from the federal government,” Green, a former curator of contemporary art at the NGV, said.

“The Australia Council [for the Arts] has got a tiny budget – it does the best it can, but it really has a budget that’s minuscule compared with what Australia puts into sport.”

Unveiling the donation on Lindsay Fox’s 85th birthday, the state’s creative industries minister, Danny Pearson said the investment was an “extraordinary gift to the people of Victoria”.

“Many of us grew up seeing the bumper sticker saying you’re passing another Fox and this investment today will mean that for generations to come, people will be coming to the Fox.”

“This investment, on Lindsay’s birthday, is a wonderful and generous birthday gift from him to the people of Victoria for generations to come.”

Pearson said the new gallery would be a “true game changer” and a “nation-defining project” as one of the world’s largest galleries dedicated to contemporary art and an “architectural icon”.

Green said philanthropy has been vital to the NGV since its early days, when pharmacist Alfred Felton bequeathed half of his substantial wealth to the gallery at his death in 1904.

With this money the NGV acquired more than 15,000 works that are now collectively worth more than $2bn.

Green said he had no issue with a family being awarded naming rights over NGV Contemporary.

He said he would object if it were a brand or family name associated with something “harmful” such as cigarettes or opioids, noting the UK’s Victoria and Albert Museum’s relationship with the Sacklers, the family accused of making a profit from the US opioid crisis.

He said there would be “no strings attached” to the Fox family donation and hoped it would encourage a new generation of philanthropists.

The Andrews government has invested $1.7bn in transforming the precinct.

The Fox family has a record of making financial contributions to the NGV, including acquisitions of major works of art and design.

Paula Fox – who sits on the NGV’s board – said she hoped the donation would inspire other philanthropists to make donations to the gallery and “make this an icon for the future”.

The NGV director, Tony Ellwood, praised the leadership of the Fox family for the arts sector, noting the donation would have a “real, tangible impact”.

Ellwood was unable to tell reporters how much the NGV was hoping to raise for the gallery.

“At this stage we’re just being incredibly ambitious. We’re going to see what we can do. We’re saying that this needs to be the biggest campaign we’ve ever run – probably the biggest arts and culture campaign ever run in our country.” he said.

Ellwood also stressed that the title of the gallery was “bestowed by the government and the gallery” to recognise the Fox’s financial contribution, flagging it was a no-strings-attached donation.

“The Fox family have, actually, really asked for very little,” he said.

The new gallery will include exhibition and education spaces and laboratories for the conservation of artworks. The government has estimated more than 11,000 jobs will be created over the life of the project and the gallery will generate hundreds of ongoing creative sector jobs when it opens in 2028.

The contemporary gallery – an 30,000 sq metre building – will sit behind the existing NGV and look out onto new public parklands connecting St Kilda Road in Southbank to Melbourne’s riverfront.

Last month, the government unveiled the final design of the building – by Angelo Candalepas and Associates – a competition judged by a jury.

The award-winning design – described by the government as Melbourne’s equivalent to the Eiffel Tower – includes a rooftop terrace, a restaurant with CBD views and a 40-metre-high spherical entrance hall.

Plans to build the new contemporary gallery and redevelop the city’s arts precinct were first announced by the state government in 2018 after it bought the Carlton and United Breweries building at 77 Southbank Boulevard for about $95m.

The government has estimated 1 million visitors a year will pass through the new gallery once it opens.