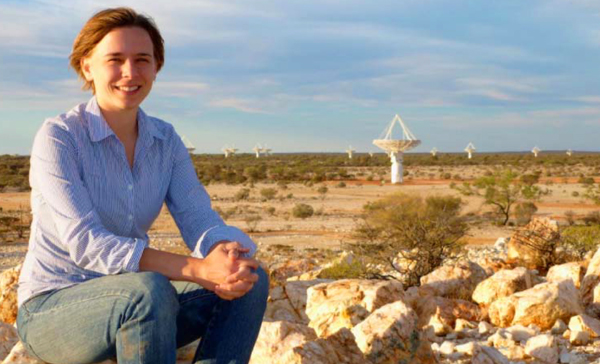 As a child, Lisa Harvey-Smith was more interested in sport than science. Now the celebrated astronomer loves sharing the wonders of the universe.

Lisa Harvey-Smith vividly remembers the day — or the night, more correctly — she became hooked on the heavens.

She was 12 and was standing in the backyard of home in Essex, England, with her dad Dave. “He showed me Mars in the sky, which you can see without a telescope, which many people would be amazed at,” she recalls. “That was kind of the moment I fell in love with the stars because that was the first time I really noticed them. As a kid you don’t go out at night much, so you didn’t really see the stars unless you were camping. We looked at Mars and we looked at star shapes and I just wanted to know more.”

So her dad went down to the local op shop and came home with a “dusty, old, mouldy smelling Star Atlas and I just fell in love with it. I loved maps anyway and star maps were a whole new thing. I became absolutely obsessed. I was 12 years old and here I am at 38 and I’m still doing it.”

These days Lisa gets paid to look at the stars — the award-winning astronomer is part of the CSIRO’s Astronomy and Space Science team working to help bring the biggest telescope in the world to fruition. And she has rather more high-tech guides at her disposal than an old atlas, tapping into the world’s most powerful telescopes from her lounge room, which is now in picturesque Hobart.

But her passion is unchanged. When she talks about the universe it’s with the same wonder as a child, that infectious quality that makes her a natural at sharing wisdom with others. Lisa may have a masters degree in physics with honours and a PhD in radio astronomy, but this professor likes to break down the barriers between those who study the universe and those who merely stare up at it from time to time.

“I’m really interested in speaking about science, trying to bring science and its real-world outcomes to people — to just make people excited about science and know what’s going on around them,” she says. It’s a passion that has led Lisa to make regular TV appearances, taken her around the world on speaking engagements, and earned her the prestigious Eureka Prize in 2016 for her work promoting the understanding of Australian science research (she was short-listed the year before).

It’s also a passion that has brought her into the orbit of three of the 12 men to have walked on the Moon. “I met producer Ricky Schutte at an event at the Australian Museum a few years ago and he was talking about bringing Buzz Aldrin to Sydney and Melbourne and I said I could probably help you with that,” she says. “I gave a talk at the start of Buzz Aldrin’s show and then I hosted the national tour with Gene Cernan, which was such an honour.”

The second man to set foot on the Moon and the last, who died in January last year, clearly made an impact on a starstruck Lisa. “There’s an aura about them, they’ve got nothing to prove really because they’ve achieved so much. But they’re still reliving this experience in their quest to excite people with it, to keep this legacy alive because you get the feeling that they didn’t just do it for them — they felt like they were in the right place in the right time and they were doing it on behalf of humanity.”

It’s an experience she will get to share again in May when she hosts a national tour of Mission Control: The Unsung Heroes of Apollo. The documentary, by the same award-winning team behind The Last Man on the Moon, is the spellbinding story of the men back on Earth in Houston, charged with getting the astronauts safely to and from the Moon, once president John F. Kennedy declared in 1961 that the nation would land a man on the lunar surface and return him safely before the end of the decade.

In a mixture of archival footage and interviews with these still sharp-as-tacks operators, Mission Control charts their successes and failures with remarkable candour and the intensity of a thriller. Two of those men — Charlie Duke, who was part of mission control for Apollo 13 and would become the 10th, and youngest, man to walk on the Moon; and Gerry Griffin, one of four flight directors during the Apollo era — will join Lisa for a special conversation and Q&A after the screening.

“(Watching it) you put yourself in their position. These guys are just saying something’s wrong and we’re a million miles away, and there’s gas coming out of the side,” she says. “And the way they went about solving it with odd bits of toilet rolls and cardboard, it’s amazing.”

And they all appeared so calm. “It’s a phenomenal thing. When you go through the astronaut selection, they’re looking mostly for psychological profiles, that you’re very good under pressure. That’s the key thing — maybe panic inside for five seconds but then go ‘OK, what are we going to do about this’. That’s the great thing when I meet these astronauts … they are just so calm and steady. Their intellect and their background is phenomenal, but they’re not academics mostly, they don’t have PhDs on the whole, though Buzz Aldrin does. They are just amazing people who have gone through incredible emergency situations again and again and they’ve trained themselves to be calm under pressure.”

As a scientist devoted to exploring the universe, Lisa believes their legacy can be in no doubt. “I think Apollo really changed the world and not only because it inspired people because they all sat and watched the Moon landing — they all huddled around televisions and in corridors, and in Times Square in New York, and in Africa in someone’s backyard. That environment inspired people probably for 100 years hence.”

It certainly helped lay the foundations for projects such as the $2 billion Square Kilometre Array, a mind-boggling global science and engineering project that will ultimately enable brainiacs to get a closer look into the great unknown. Much of the infrastructure — a bewildering collection of telescopes, dishes, antenna and supporting technology — is being built here in the Murchison, chosen not for its magnificent night skies or low light pollution (though both are helpful) but for its low radio interference. Astronomers don’t want anything to get in the way of an ambitious fact-finding mission that has already been 20 years in the planning.

“It’s not just one country; the whole international astronomy community is coming together to figure out what is the genuine next generation, next big step, in what our capabilities can be to study the universe,” Lisa explains. “In radio astronomy, which helps us study parts of the universe we can’t see with optical telescopes, the whole community’s come together and designed the SKA. And the fact that this has been sited in WA, and of course South Africa, is an amazing achievement for Australia.”

The astronomer, who was part of the bidding process and was then charged with helping the public understand why it matters, now works on the Australian SKA Pathfinder telescope, or ASKAP, which is also on the Murchison site. “These are smaller versions of the SKA, which is developing the technology to allow us to see more distant objects, studying literally hundreds of millions of galaxies, to see how the universe is made up and the diversity of objects in the universe and how they interact with one another. So it’s big picture, it’s studying everything in the universe — everything we can see and everything we can’t see.”