You are here: Home » Articles filed under: 'News' » Article: 'Lisa Havilah on what is needed'

Lisa Havilah on what is needed

February 28th, 2019 | Browse other: News. | Tagged with: future of the Powerhouse, leading MAAS into the future, Lisa Havilah | 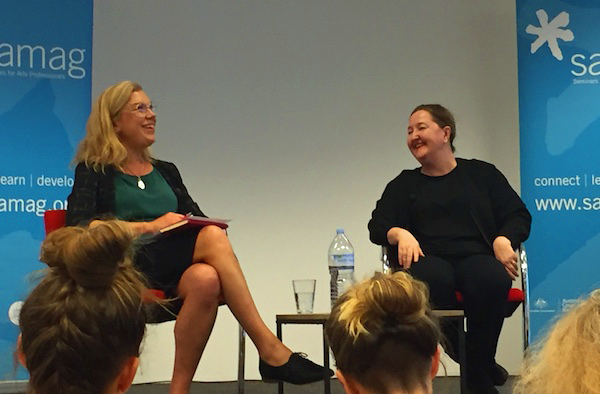 Gina Fairley, Lisa Havilah on what is needed to lead MAAS into the future, Art News, 22 February 2019

After just five weeks in the job as the new CEO of the Museum of Applied Arts and Sciences, Havilah has faced the big questions of the Powerhouse’s future at an industry event.

Sydney’s Museum of Applied Arts and Sciences (MAAS) recently appointed its fourth leader in five and a half years, with former Carriageworks CEO, Lisa Havilah taking up the position in January.

Part of her role is to navigate the institution through the current state government’s planned $1.17 billion move of the Powerhouse Museum to Parramatta. And with NSW state elections around the corner, and an Opposition that has alternative plans, stakeholders across the sector are watching keenly.

In conversation with Edwina Throsby (Head of Ideas at Sydney Opera House and former Head of Curation for Ted X Sydney), Havilah was probed on how she would bring her Midas touch to an institution plagued by political agendas, opinion, history, contested location and ruptures to its reputation.

The Powerhouse Museum is expected to close its Ultimo site in early 2020, as it prepares for the move west.

Earlier this month, MAAS opened its International competition for an architecture to design the proposed Powerhouse Parramatta museum and cultural precinct.

Havilah’s record of growing audiences will be more important than ever as the institution seeks to maintain momentum while also reaching out to a new community, when all eyes will be on its metrics for success.

Here are ten lessons that Havilah shared which may shed light on the Museum of Applied Arts and Sciences’ future:

‘I have always been committed to good strategic thinking. I believe the choices you make – what artists you approach and how you make decisions as an institution – must always reflect the institution’s strategic framework. I really believe in the power of strategy.

‘Choosing those strategic frames are critical, and while there needs to be creative decision making within that, if you have a strong strategic frame you can take more risks and be more creative because everyone understands the context for the decision.’

‘Why I think Carriageworks was so successful was that its board worked within the structure set up, and everyone was really clear on what we were trying to achieve and where ambition sat.

‘The matrix of that board was matched very closely to the strategy frame – so if this is our strategy then this is what we need on a governance level to deliver that strategy.  That strategic frame not only has to filter down into the institution and what you produce, but also has to move up to the governance of an institution.’

3. DEALING WITH UNCERTAINTY AND GOVERNMENTS, WHILE BEING A ROCK FOR COMMUNITIES

‘My position doesn’t change whatever the politics or government of the day might be – we will deliver a great outcome regardless. I am a servant of the public; I take that very seriously.

‘My practice as an arts manager, and an arts producer and program maker, has always started from a very local context. I learned a lot when I was director at Campbelltown Art Centre and there was so much change happening on a very local level. The council played a strong role in understanding how culture can contribute to social cohesion but also how diverse communities can become more visible through practicing and presenting their culture in a public institution.

‘We set up curatorial structures in the institution to take the decision-making power away from the director or curator, and to put it in the hands of the community, working with  community curatoriums. That decision of active engagement really helped in presenting quite difficult material and perspectives that connected with that place.’

4. DON’T ASK AUDIENCES WHAT THEY WANT

‘There is a lot of language around institutions and audiences and our responsibility is to provide what they need, and to develop the best exhibitions for their benefit. That is not about asking them what they want.

‘You always need to consider the program first and the curatorial cohesion, but within the frame of making, to ensure what we are doing is culturally relevant to our communities. To just go and ask what an audience wants is not effective.’

‘One of the things I have really tried to do is grow the institutions. I have worked with them in ways that are culturally relevant, but in a way that does not compromise artistic excellence.

‘What I am proud of, is that we were completely uncompromising with the projects that we made [at Carriageworks]; they were very ambitious projects and we tried to create this unmediated experience for our communities. What I think many cultural institutions do too much is try to explain and educate all the time. They don’t leave enough space for those experiences to grow.

‘The context of the museum today is that people want direct experiences and you have to hand over space for the community to grow towards the work.’

‘When thinking about the renewal of any institution and the need for more flexible spaces that can provide a diversity of immersive experience – one thing we really want to think about is how the new museum at Parramatta would work as a precinct. There should be a move away from the museum as a box placed on a piece of land, and rather a consideration for how it integrates and contributes into the fine grain of the city – how it operates over 24 hours and how it can diversify its contribution.

‘There is also the nature of arts and culture to create civic gathering places for communities, where they might have gone to a community hall in the past. The exhibitions [we present] must become part of that place. When you relate that to MONA, for example, that experience is quite distinctive – it is a strong individual memory and quite quickly has become a collective memory.

Throsby probed Havilah about an earlier comment she had made about embracing entrepreneurship. Havilah had said, ‘It is not commercialsing the cultural; it is culturalising the commercial.’

Havilah continued: ‘At every moment we tested that – we tested a lot at Carriageworks. I am proud of that entrepreneurship which actually allowed us to grow through our commercial partnerships and the way we collaborated.

‘We took away the whole notion of venue for hire and everything we did went through the same curatorial lens. We integrated those major events into our artistic program, so whether making money or whether we were investing in programming, we didn’t define that. The benefit that our commercial partners got was that they were going through the same curatorial funnel – it was a mutual benefit.

In an earlier interview with ArtsHub, Havilah made the point that at Carriageworks, ‘self-entrepreneurs were about 75% of our turnover through commercial partnerships … That is reason Carriagrworks has been able to grow over the past six years.’

Havilah believes that through strong partnerships your funding can grow, and you don’t have to be reliant on hyped box office sales.

When asked why Havilah decided to leave Carriageworks, she responded: ‘I have a very strong personal philosophy that artistic leaders –  directors of institutions – should only be in a position for a period of time.

‘I think institutions need renewal and that includes leadership.’

Havilah’s curatorial practice and management style have been described as meticulous, and as Throsby suggested, she had a ‘tendency to control freak’.

Havilah admitted: ‘Yeah, I have to work on that! It is hard to step back when you are super invested. Good practice is in the detail! It is an everyday practice and I take that very seriously.

‘I have always taken the approach that you can only do your best on any given day. You need to focus on what contribution I am making – am I using my time in the right place? I believe that you can only ever do 10% of the job in a day, so it is clearing the other 90% from view to focus and do that 10% well.

‘How? You write a list and you work through it.’

Throsby quoted Havilah’s own words in order to dig deeper on her management style: ‘I’d like my generation to push forward harder; to be less polite. We are way too polite. People talk a lot about what they believe in, but don’t spend as much time on how their beliefs can be delivered on – we compromise too much.’

Havilah agreed with her earlier comments, and added: ‘I think sometimes compromise is misplaced. While we need to give space to others, it needs to be done in the right way.’

10. MYTH-BUSTING THE TYRANNY OF DISTANCE

Speaking to perceptions about the city she calls home, Havilah said: ‘I don’t think it should be discussed as Sydney and Western Sydney; it should just be one Sydney. There is still that perception that to go there [to Parramatta] you have to pack a bag and might need to book a room.

‘I think that “out there” mindset is changing in the way the government is planning forward. We will see incredible change across the [greater] city in the next five to 10 years which will really shift those perceptions.’

To read more on Lisa Havilah’s management philosophy and successes, take a look at the paper, The next generation of the cultural institution, which she delivered to a group of arts professionals as part of the Currency House Creativity and Business Breakfast Series.

Lisa Havilah was in conversation with Edwina Throsby on DATE as a guest of SAMAG, a network of art professionals.