January 21st, 2021 | Browse other: News. | Tagged with: Living off the land: Lockdown gardens, strategies used in the past to produce and preserve food, Te Papa | 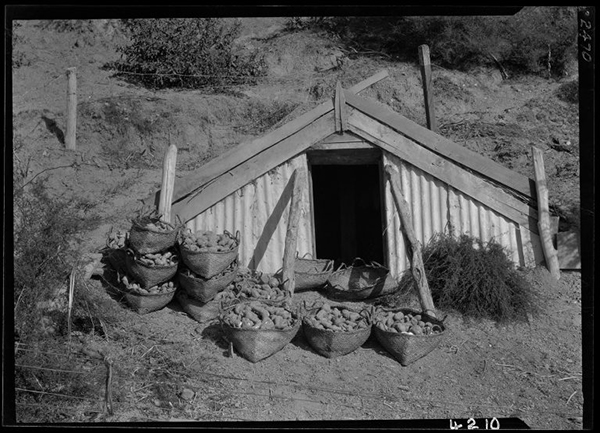 In this blog curators, Isaac Te Awa and Katie Cooper use objects and photographs from our collection to explore some of the strategies used in the past to produce and preserve food.

The Polynesian ancestors of Māori brought many plants with them from the Pacific islands, however, because of Aotearoa New Zealand’s vastly colder climate, many of them were unable to grow or thrive. Kūmara became the most important of the introduced crops due to the rarity of available carbohydrates and new innovative methods were adapted to grow and store it.

Māori developed large areas of land, preferably on the sides of hills to take full advantage of available sunlight. The kūmara were grown in mounds of soil with sand added to facilitate and improve drainage. Tubers were harvested around February to March and stored in special pits known as rua kūmara. Some kūmara were eaten over the colder months and others were stored and planted next season. 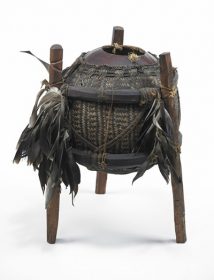 Another important cultivated crop for Māori was the hue, or the gourd. Like the kūmara, the hue was brought with Māori from Polynesia. The young fruits of the hue were eaten as a vegetable, while the best shaped gourd fruits were allowed to mature and were then dried. These dried gourds were used as water containers, but more importantly were crafted into taha huahua (gourd containers).

Taha huahua were mostly commonly used to store cooked birds. The top of the gourd was cut to form an opening. The birds were then layered inside and covered with melted fat, preserving them for future use. The feathers attached to the outside not only add to the beauty of the taha huahua, but also identify the species of bird stored inside. Sometimes other sources of protein such as kiore (Polynesian rat) or kurī (Polynesian dog) were also stored in them.

In the lower South Island where the weather was too cold to grow hue, rimurapa (bull kelp) was worked and stretched to form kelp bags known as pōhā. In the past these were used primarily to store tītī (mutton birds) and are still used by some families today.

Nineteenth-century settlers established vegetable gardens of their own – gardening was one of a number of home food production activities that provided working-class landholders with some level of economic protection (Morris 2010).

Rural people continued to cultivate large vegetable gardens until at least the 1960s.  These were an especially important source of food while they were establishing their homes and farms, and during times of economic distress such as the Great Depression of the 1930s.

This photograph, taken by Maud Adkin in August 1916, shows Leslie Adkin turning the first sod of their kitchen garden at ‘Woodside’ in Levin. The couple, newly-married, moved to Woodside in March of that year, and by Christmas had their first veges. 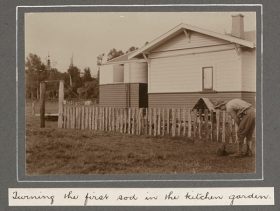 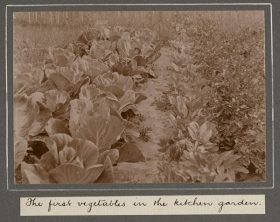 In the suburbs, the backyard was an important site of domestic production. Many backyard sections had large vegetable gardens – sometimes covering the same area as the house – as well as chicken sheds and fruit trees.

In this photograph, taken by Roland Searle in the 1920s or 1930s, a Christchurch man is tending to vegetables planted in neat rows. Although usually very orderly, vegetable gardens were always at the back of the house while the front garden was designed for display. 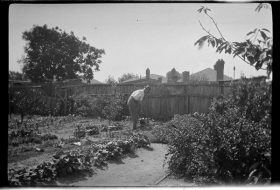 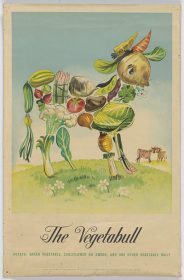 Home and market production of vegetables declined during the Second World War as labourers entered the armed forces. With a shortage looming the Government launched a ‘Dig for Victory’ campaign in 1943, encouraging New Zealanders to grow and eat more vegetables.

This ‘Vegetabull’ poster, produced by the Department of Health in about 1950, is based on a Second World War poster advising people about maintaining a healthy diet in the context of wartime rationing. It suggests eating ‘potato; green vegetable, cauliflower or swede; and one other vegetable daily.’

The Covid-19 pandemic prompted many New Zealanders to think more carefully about their food security, and encouraged a renewed interest in productive gardens. It’s also been an opportunity for many to connect back to the whenua (land) and the Maramataka (Māori lunar calendar).