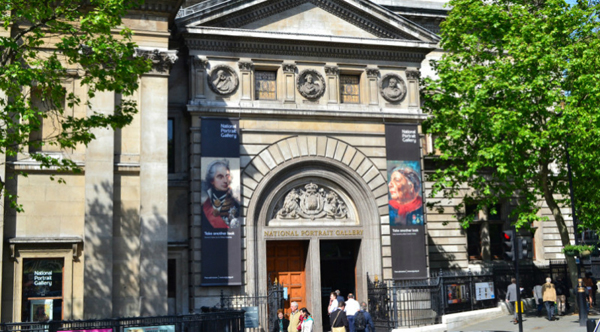 Image courtesy of the Art Fund.

The gallery is the first major art museum to put a donation from the Sackler family on hold, indefinitely.

London’s National Portrait Gallery has become the first major art museum to publicly turn down a donation from the Sackler family, albeit for the time being. In a move that will be closely watched by arts organizations around the globe, the NPG decided not to move forward with the £1 million ($1.3 million) pledge, which would have been its first major gift from the Sackler Trust, for its planned revamp. The landmark announcement follows growing criticism of the Sackler Trust’s links to Purdue Pharma, the maker of the controversial painkiller OxyContin.

The gallery’s director and trustees have been deliberating for more than a year about whether to accept the money. During that time, the American artist and anti-opioid activist Nan Goldin has stepped up her campaign against institutions that have accepted the Sacklers’ philanthropy. Although she initially focused on US institutions, Goldin recently announced in an article in the Guardian that she would not collaborate with the Portrait Gallery on a possible retrospective if it accepted Sackler funds.

At the same time, members of the Sacklers have also become the target of a series of lawsuits, including one brought by Massachusetts Attorney General Maura Healey, who alleges that the family engaged in deception and misconduct to make as much money as possible despite the public health risks associated with OxyContin. The family’s role in the opioid crisis has come into starker relief as court papers and other documents are made public in the legal proceedings.

The NPG and Sackler Trust announced that the decision to postpone the award was mutually agreed. In a statement, the trust vigorously denied the allegations against the family but acknowledged they “may cause this new donation to deflect the National Portrait Gallery from its important works.” Still, the museum and the trust have not ruled out a future gift. The trust continued: “To avoid being a distraction for the NPG, we have decided not to proceed at this time with the donation.”

David Ross, the chair of the National Portrait Gallery, said in a statement: “I acknowledge the generosity of the Sackler Family and their support of the Arts over the years. We understand and support their decision not to proceed at this time with the donation to the Gallery.”

Meanwhile, it appears that Goldin’s retrospective will move ahead. In a statement to artnet News, a NPG spokesperson said: “We are in active conversations with Nan Goldin over plans for a future exhibition, the details are still being discussed.”

Speaking to artnet News on the telephone, Goldin says that the decision was not directly caused by her. “I’m not responsible for this. I hope I had an impact. I make a lot of noise and they knew my attitude; I think the National Portrait Gallery knows the difference between good and evil.” She hopes the decision will have a domino effect with other institutions.

“Museums to live up to their mandate and their mandate is to be a repository for the best of human values. Universities are supposed to be places of vision and learning. It’s outrageous that none of them have refused funding,” she says, commenting on why implicated institutions in the US have been so subdued on the issue.

The opioid crisis has claimed more than 200,000 lives since OxyContin went on sale in 1996. The pharmaceutical brand behind the medicine, Purdue Pharma, was established by Sackler brothers Raymond and Mortimer. The Sacklers, not all of whom are connected to Purdue Pharma—one brother, Arthur Sackler, held a stake in a related company, Purdue Frederick, and died before Purdue Pharma was founded—are among America’s wealthiest families. Forbes estimated their combined fortune at around $13 billion in 2016.

Nan Goldin, who overcame her own addiction to OxyContin, has been campaigning since the beginning of 2018 for the art world’s leading institutions to publicly refuse funding from members of the Sackler family and for the Sacklers to use their wealth to help tackle the opioid crisis. “We are so excited and gratified and proud that we managed this in one year,” she says, though she credits “intrepid journalism” as well, such as Patrick Radden Keefe’s reporting in the New Yorker.

Most recently, Goldin and her advocacy group P.A.I.N. stormed New York’s Guggenheim in a surprise action on February 9. Around 100 activists threw white “prescriptions” down into the museum’s atrium and dropped large, blood-red banners stating “take down their name,” before continuing their march to the Met. Both institutions have annexes bearing the Sackler name and have received major funding from the family—a common thread across many major US museums. Since 2018, Goldin’s group has staged several protests at American institutions, but none so far in UK museums.

The Met recently shared a statement acknowledging its Sackler funding and saying that it plans to review its gift acceptance policies.

The London-based Sackler charities, which include the Mortimer and Theresa Sackler Foundation, have given millions of pounds to arts organizations across the UK, including Tate Modern, the National Gallery, the Serpentine, the Dulwich Picture Gallery, and the Victoria and Albert Museum, where Theresa Sackler (the widow of Mortimer Sackler) is a trustee.

Over the weekend, the Milton Keynes Gallery reopened with a new wing. The Sackler Trust is among the funders thanked at the entrance.