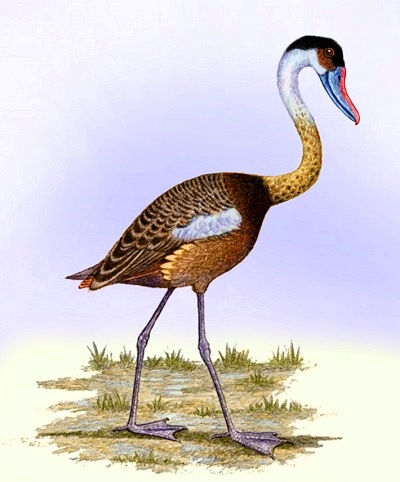 The 22 million-year-old fossil remains of a long-lost family of waterfowl – thought to have disappeared about 48 million years ago – have been identified by researchers from Canterbury Museum and Flinders University, Australia.

Presbyornithids were wading waterfowl, with the body of a stilt and the head of a duck. They lived in huge colonies on freshwater lakes, much like flamingos or stilts do today. They were thought to have disappeared worldwide when the early relatives of ducks and geese first appeared about 48 million years ago.

Recent research on fossils found in the 1980s near Lake Eyre in northern South Australia, has revealed that presbyornithids were still alive and well ‘Down Under’, until at least 22 million years ago. Unlike all the other presbyornithids, the Australian birds (which go by the scientific name of Wilaru) were predominantly terrestrial. This allowed them to co-exist with their mainly-aquatic modern relatives and probably contributed to their long-term survival in Australia.

In the new research published today in Royal Society Open Science, the research team reports that a reanalysis of the South Australian fossils shows that rather than Wilaru being a shorebird (Charadriiformes), it was actually of the waterfowl (Anseriformes) lineage.

Dr Vanesa De Petri who led the research at Canterbury Museum says that what’s really remarkable is that the Australian presbyornithids lived alongside modern waterfowl like ducks and geese. “This is the first and only record of this co-existence,” she says.

“In South Australia, the presbyornithid Wilaru lived alongside at least four types of duck and several types of flamingo. If it had remained a wading bird, it would have been in direct competition with the flamingos. The Wilaru probably had relatively short legs compared to other presbyornithids, because it was evolving into a non-wading bird. Yet judging by the abundance of its fossils in one deposit, it still lived in huge flocks like its ancestors, says Dr Paul Scofield, Canterbury Museum Senior Curator Natural History.

“The terrestrial adaptations of Wilaru should perhaps not come as a big surprise, considering that much of Australia’s vertebrate fauna had to adapt to changing environmental conditions during that time”.

“This discovery of a whole new and most distinctive group of birds shows how little we know about avian evolution in Australia. It is exciting to speculate about what else will be discovered, but as our research shows, a global perspective in its interpretation is all important.” says Dr Trevor Worthy, Flinders University.

You can find the article in Royal Society Open Science here.