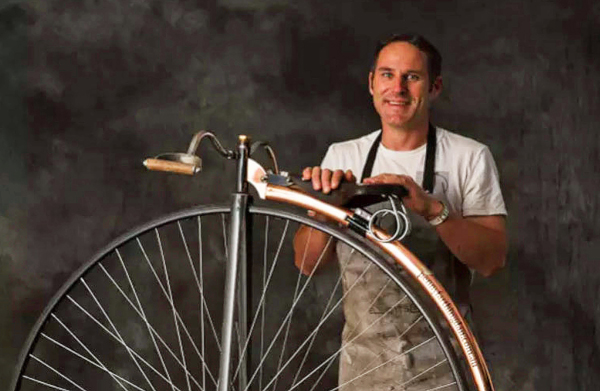 Dan Bolwell – known as Penny Farthing Dan – will show crowds how the old bikes are made.

In a bygone era, coopers and wheelwrights were some of Queensland’s most vital tradies, but these days it would be pretty unlikely to see many of them enjoying a beer at a pub after work.

To showcase these historical skills and the master artisans who keep the crafts alive, the Lost Trades Fair is returning to Cobb and Co Museum in Toowoomba this weekend.

Crowds can watch talented craftspeople practise their skills in a rare glimpse into more than 50 trades of Queensland’s past.

Sixth-generation cooper George Smithwick has made a living from his craft – making wooden barrels, buckets and tubs hooped in metal – for more than four decades.

Mr Smithwick said people were changing their attitudes towards the lost skills.

“Slowly, people are starting to realise that milk doesn’t come from a supermarket, it comes from a real place,” he said.

Mr Smithwick was also passionate about continuing his family’s legacy by encouraging people to view his trade as a viable alternative to plastic.

“They are getting the idea that you don’t buy something and throw it away … if I make a bucket or a barrel for someone, you will have it in 30 years’ time,” he said.

Lost Trades Fair founder and director Lisa Rundell said she wanted to educate attendees of the sustainable aspect of supporting the displayed crafts.

“Our aim is to inspire, educate and open the eyes and minds of the next generation to demand something made by a real person rather than a machine and to think about sustainability and the longevity of what they buy and use,” she said.

“With so many master artisans in the one place over the weekend, we want to encourage people to have the confidence to design, make and create something real, and something crafted by their own hands.”

Queensland Museum Network acting chief executive Jim Thompson says the Lost Trades Fair shone a light on the dedication and passion of the artisans and gave them the chance to pass on their skills to younger generations.

“Visitors will get an authentic experience as they learn first-hand about historic crafts and trades that were once commonplace, and which contributed greatly to Australia’s development as a country,” Dr Thompson said.

“The Lost Trades Fair demonstrates the superb craftsmanship still practised today in many of these trades.”

More than 7000 people attended the fair last year and Ms Rundell said she hoped to see a similar crowd this weekend.