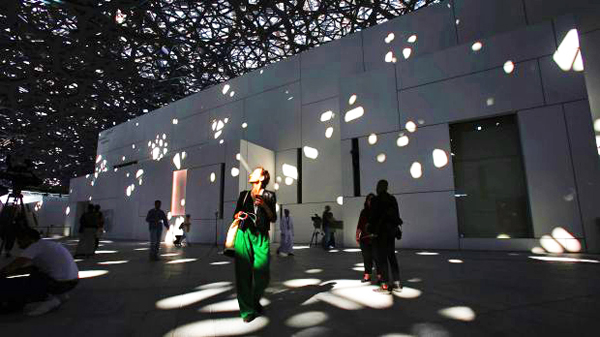 A journalist walks under the lights coming through of the dome at the Louvre Abu Dhabi, UAE, before its Saturday grand opening to the public. Photo: AP.

Abu Dhabi: Welcome to the “Island of Happiness”.

Here, on a literal desert island off the coast of the United Arab Emirates, a young, oil-rich nation-state is seeking to rise above its neighbours and catapult itself into history. At the same time, the world’s most famous museum is looking to expand its empire and line its coffers for decades to come.

This is the story of the Louvre-Abu Dhabi, the long-awaited centrepiece of a multi-billion dollar complex slated to showcase some of the most powerful names in the western cultural universe: the Guggenheim Museum, New York University and the Sorbonne, among others.

On Saturday, the Louvre project – the first overseas expansion of what is perhaps Europe’s most venerable art institution – will finally open its doors after a decade of bitter controversy.

In France, scores of industry professionals still decry what they see as a beloved museum selling out to the highest bidder, accepting $US520 million ($677 million) from the Emirati government for the use of its vaunted name. Globally, human rights watchdogs still accuse the Louvre and other institutions on the island of having exploited and abused migrant labour.

The French and Emirati governments quickly christened the new Louvre as a universal museum “that will broadcast tolerance and acceptance”.

But the real purpose of this gleaming ziggurat on the waterfront remains a matter of intense debate. Is the Louvre-Abu Dhabi really about art? Or is it a pawn in a larger game of statecraft and geopolitics?

Inside the Emirates, the new museum is seen primarily as a means of recasting the nation’s public image from a “playground in the desert” to a cultural powerhouse.

“This is a major statement,” said Sultan Sooud al-Qassemi, an Emirati royal and prominent art collector.

“This is saying that we’re not playing in the little leagues – we’re playing in the major leagues. It’s probably the greatest museum in the world, and it will have not just a small branch but a massive presence.”

The project also figures into internal competition among the UAE’s seven constituent kingdoms, each of which is seeking its own distinctive niche, said Kristian Ulrichsen, an expert on the history of the Gulf states at Rice University.

Dubai, he said, embraced business and infrastructure nearly 20 years before the capital Abu Dhabi which ultimately controls the lion’s share of the country’s oil reserves. Flush with cash, the ambitions of the latter continue to rise.

In France, the Louvre Abu Dhabi has long figured in discussions that have far transcended the realm of art for art’s sake.

“The objective was never aesthetic – it was political,” said Didier Rykner, a French art historian who is among the project’s most outspoken critics.

Authorised by a 2007 act of the French parliament, the new museum is often considered a soft power component of a broader strategic expansion into the Gulf region, which included the installation of permanent military bases in Abu Dhabi in 2009, the French military’s first overseas expansion since decolonisation began in the mid-1960s.

As Nicolas Sarkozy, France’s then-president, said when he inaugurated those bases, they would “show the responsibility that France, as a global power, agrees to assume with its closest partners, in a region that is a fault line for the whole world.”

This is a stance that Macron, since his election in May, has only maintained, attempting to position France as a chief interlocutor on the world stage, and especially in the Middle East on the question of Iran.