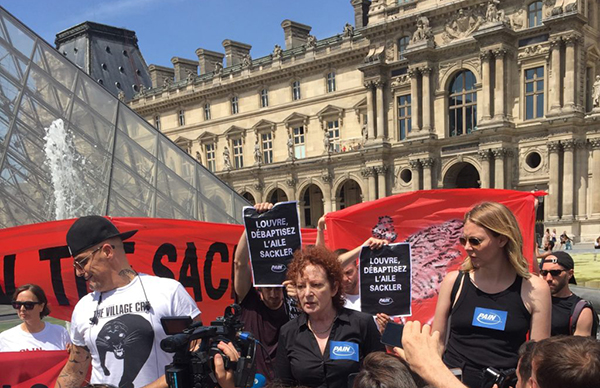 Nan Goldin speaking at the protest outside the Louvre. Photo courtesy Sackler P.A.I.N.

The museum claims the removal is simply the result of the expiration of an agreement with the family, but activists claim otherwise.

In an unprecedented move, the Louvre has removed all mention of the Sackler name from its walls and its website. As of today, the Paris museum has stripped from its wing of Oriental antiquities the name of the family behind Purdue Pharma, a company that has become embroiled in the opioid crisis. The name’s disappearance comes on the heels of a protest at the museum earlier this month by Nan Goldin’s activist organization, P.A.I.N.

For its part, the museum denies that the removal of the name was anything other than the result of business as usual. In an interview on French radio yesterday, the president of the Louvre, Jean-Luc Martinez, said that no room in the museum had to be renamed because the Sackler name was only put in place as part of a 20-year agreement beginning in 1993—and as such, the agreement had expired and there was no name to remove.

The activists dispute this claim. “This is a lie on two counts,” representatives from P.A.I.N. wrote in a statement. “First, the nomination of the rooms in tribute to the Sackler family took place in 1997 (two years after the introduction of Oxycontin), not in 1993. Second, the museum’s website and the plaques at the entrance to the Sackler Wing rooms were clearly marked with the family name just a few weeks ago.”

P.A.I.N shared photographs of the Sackler name emblazoned on plaques taken at the museum sometime before May 29 of this year, and more recent images showing that the name has been removed or obscured with tape, to support their position. They also allege that a day after Martinez spoke to RTL, the Sackler name was removed from the museum’s website. Further, they argue that none of the Louvre’s official documentation supports Martinez’s assertion on the radio that a room can only be named after a patron for a maximum of 20 years.

“We protest against this attempt to rewrite history and call on Jean-Luc Martinez to rectify his statements as soon as possible in order to make official the removal of the Sackler name from the Louvre,” the statement reads.

The Louvre is standing by Martinez’s comments, although they clarified the timeline of the Sackler’s donations. A spokesperson told artnet News the museum had not received a donation from the family since 1997. Since the sponsorship is more than 20 years old, “it legally fell,” she said. “These rooms were not debaptized.” She did not clarify why the names were not removed until recently, when the sponsorship would have formally ended two years ago.

The activists acknowledge that the museum might never make an official announcement about this change. But they are encouraging institutions around the world who have accepted money from the Sacklers—many of which have now publicly refused to take future donations from the family—to go a step further and make a conscious decision to remove the name from their walls.

“Museums and cultural institutions must maintain their integrity,” they write. “They should not bear the name that is synonymous with the opioid crisis…. Now it is time to take the next step and take down the name of this criminal family.”