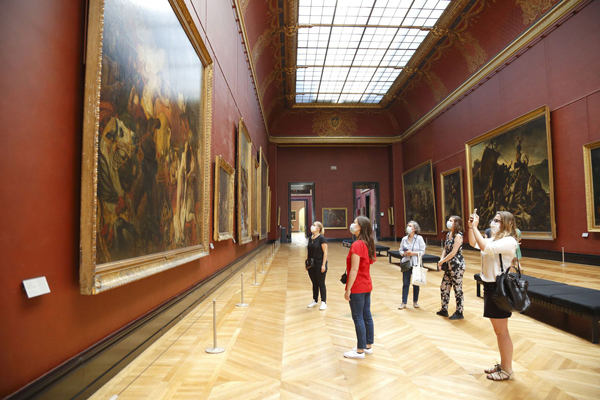 Visitors in the Musée du Louvre in 2020 © Antoine Mongodin

Despite kicking off 2020 with a record-breaking Leonardo exhibition, like many museums around the world, the Parisian institution was adversely affected by coronavirus lockdowns.

A year ago, the Musée du Louvre was in the midst of a record-breaking Leonardo exhibition that looked likely to push its visitor figures for 2020 to new heights. But as the coronavirus pandemic began to overwhelm Europe in the spring, the Parisian museum, like many institutions around the continent, closed its doors as the country went into lockdown. Twelve months later and it has reported one of its worst attendance figures ever, with around 2.7 million visitors—a 72% drop compared to 9.6 million in 2019.

Following the first lockdown, the museum was able to reopen again in the summer with restricted visitor numbers. In total, the museum was closed for nearly half the year, open for only 161 days out of a possible 311, and lost around €90m in revenues. Around three-quarters of the museum’s audience is usually from abroad but with flights grounded and an unprecedented drop in tourism to the French capital, the museum reported that around 70% of visitors in 2020 were from France.

The museum director Jean-Luc Martinez says that although the Louvre’s empty galleries saddened him and his staff, the institution’s long history (it was founded at the time of the French Revolution) is a reminder that despite hard times it is never in vain to hope for better days. The drop in visitor figures is not quite as high as the 80% that Martinez feared for in June last year.

The museum has topped The Art Newspaper’s annual survey of exhibition and museum visitors, Art’s Most Popular, for well over a decade (its record attendance was in 2018 with a whopping 10.2 million visitors). But it will likely not be the biggest loser in a year when museums around the world were, and continue to be, heavily affected by the Covid-19 pandemic.

Despite the large drop in attendance, with 2.7 million visitors the Louvre would have still been the 21st most visited museum in 2019’s attendance survey, largely thanks to the near half a million visitors who came for the Leonardo show in January and February.

The museum is currently closed because of the coronavirus lockdown in Paris, check its website for the latest opening news.