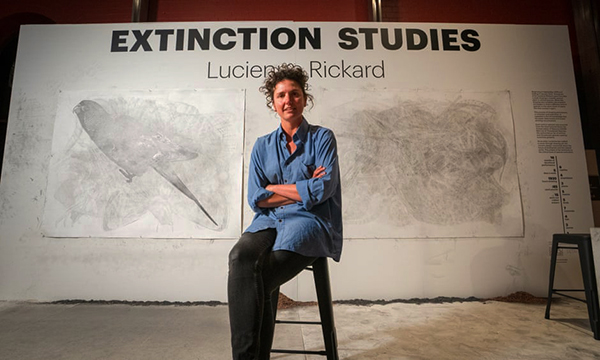 Since 2019, Lucienne Rickard has been drawing detailed sketches of lost species in a Hobart gallery. On Sunday she erased the final one.

The Tasmanian Museum and Art Gallery in Hobart is filled with people waiting for the swift parrot to disappear.

The Hobart artist Lucienne Rickard has spent five weeks drawing a large-scale pencil sketch of the critically endangered bird. Picking up her eraser, she tells her audience, “If we don’t do something soon, this is what will happen.”

The erasure, which took place on Sunday as part of Mona Foma, marked the culmination of Rickard’s Extinction Studies. The artist had spent 16 months in TMAG, meticulously drawing an archive of lost species: deer and crayfish, mice and turtles, bats and bilbies (a small, burrowing, long-eared marsupial). When they were done, she would rub them out.

The lifelike parrot is perched above the ground on its paper canvas: the last animal to go.

Below it lies the remains of all former black-and-white drawings: shavings from 25 erasers, which had removed 187 graphite pencils’ worth of art. In a few minutes, this bird will become part of the waste. 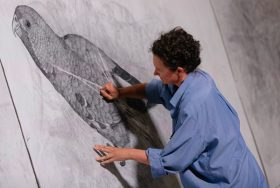 ‘It’s like witnessing a funeral’: the swift parrot was the final of 38 artworks Lucienne Rickard created and then destroyed. Photograph: Jesse Hunniford.

Rickard starts with the swift parrot’s feathery tail, wiping it clean from the page with deliberate strokes. The creature begins to vanish. From the silence, someone whispers: “It’s like witnessing a funeral.”

“We have this idea that extinction is an old problem. In fact, the opposite is true,” Rickard tells the Guardian. Throughout the project she has created and destroyed a total of 38 works of art, all depicting flora and fauna from the IUCN Red List of Threatened Species, among them the Yunnan lake newt, the corquin robber frog and the big-eared hopping mouse.

Rickard’s drawings are realistic, detailed, archival – exactly the style a visitor might expect to find in a museum. Keeping her art accessible became a “hook” to draw people into her world.

Using the same piece of paper for months at a time, Rickard drew creatures that no longer thrive, the shadow of a former species under each new sketch. Eight of these species were Australian. “We’re repeating the same mistakes over and over again, and not learning,” she says.

The idea for the project – which was commissioned by Hobart’s Detached Cultural Organisation – evolved from Rickard’s interest in nature documentaries. She began to educate herself about conservation, shocked by “how desperate it really is”.

“I thought, ‘if I don’t know about this, there are a whole bunch of other people out there who probably don’t know as well’.”

Most resonant for her was the birth and death of Rickard’s Xerces blue butterfly. She’d viewed a wing under a museum microscope and found its detail “mind-blowing … like an endless forest or landscape”, she tells the Guardian.

Informed by science, Rickard drew wings with an estimated 113,000 scales – a three-month process she describes as “torturous”, and which she documented in a series of posts on Instagram.