You are here: Home » Articles filed under: 'News' » Article: 'Lustre: Pearling and Australia' 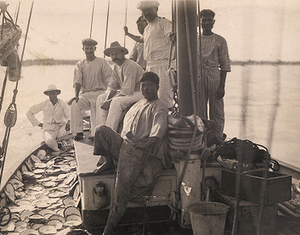 The crew of a Broome pearl lugger in the early 1900s. Photo: National Archives of Australia. Source: www.smh.com.au.

Broome pearls can be worth hundreds, even thousands of dollars, but wind back the clock a few millennia and the precious gems were more likely to be found in the hands of children.

That’s one theory put forward by experts who have examined a 2000-year-old natural pearl found near Kalumburu four years ago.

“There’s no pearl older in Australia and its survival is exceptional because unlike diamonds or mineral jewels, pearls are soft, organic and tend to degrade,” James Dexter, from the Western Australian Museum, said. “We have beads which have been passed or traded inland – those beads are still worn today by Bardi dancers,” she said …

Lustre: Pearling and Australia will open at the WA Maritime Museum in Fremantle on Saturday and run until 25 October.