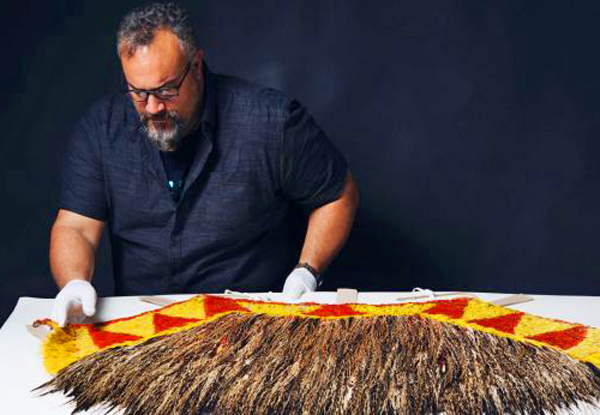 Logan Metcalfe, collections officer Pacific at the Australian Museum, examines the feathers of the rare cape given to Captain Cook by a Hawaiian chief. Photo: James Brickwood.

Film director George Miller of Mad Max fame is used to viewing the world through a camera. But as one of the Australian Museum‘s newly chosen 200 treasures – along with Australia’s first female prime minister Julia Gillard, a 2800-year-old Egyptian mummy and a Tasmanian tiger pup – his image will shine brightly inside and outside the museum.

Mr Miller is one of 100 people living and dead – including Billy Hughes, Eddie Mabo, Cathy Freeman, Bob Hawke and Sir Donald Bradman – who the museum selected because they had shaped the nation through contributions to history, science and nature or culture.

When the Long Gallery first opened at the Australian Museum in May 1857, nearly a quarter of Sydney’s 45,000 residents – equivalent to a million people today – visited within a week to see stuffed cabinets stuffed with jaw-dropping curiosities and lit by gas lamps.

On Saturday the refurbished gallery reopens, showcasing 200 of the museum’s 18 million treasures: 100 objects showcased in cabinets with related items that tell a story, and the stories of 100 people considered to be the nation’s brave and the bold. Images of the 200 people and things will be projected nightly in a Vivid-style light show from sunset from October 13 to 22.

Museum director Kim McKay hopes the quirky collection will pique visitors’ thirst for knowledge enough that they will come back again and again, and give the world’s fifth oldest natural science museum and Australia’s first museum the stature she believes it deserves.

“We are ranked the 34th largest in the world, which is extraordinary given that it is newer [than most]. We have got this extraordinary collection, which is worth close to $1 billion, and it tells us so much who we are and where we came from,” she said. “We are using [the Long Gallery’s] incredible form and architecture combined with the collection to show people that the Australian museum sits beside the great museums of the world,” she said.

Chosen by guest curator and historian Peter Emmett, the 100 objects include a Hawaiian ‘ahu’ulaa red and yellow feathered cape which was given to Captain Cook in 1778 or 1779 by chief Kalani’opo’u who was regarded the English by the Hawaiians as a god. With yellow feathers plucked from the neck of tiny birds that had tufts of one or two feathers on each neck, it would have taken years to make. The 140cm wide cape was meant to give the wearer power, and provide spiritual and physical protection. Yet its mythic powers didn’t work for Cook, who died soon after in a fight with locals.

Other treasures from the collection – many which defeat attempts to give them a monetary value – include a Tasmanian Tiger female pup collected and pickled about 70 years before the last animal died in captivity in 1936; Papuan Asaro mud men masks with comic hungry tongues created last year; a family of Aboriginal toy dolls collected in Arnhem Land in 1948 made from shells wrapped in cloth; the paradise parrot, the only mainland bird to become extinct since the arrival of Europeans; and the night parrot, thought to be extinct but recently found to be alive.