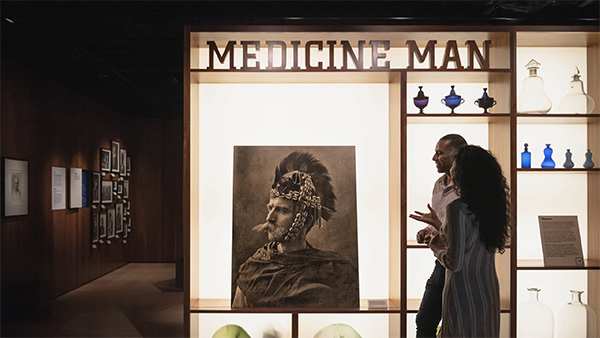 The Wellcome Collection says its decision to close the Medicine Man gallery is the “result of several years’ research and reflection”.

The London museum faced a fierce backlash over the weekend after announcing in a Twitter post that it was closing down the permanent exhibition on 27 November. 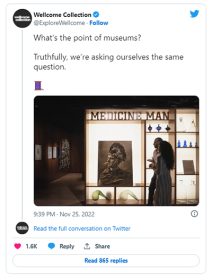 In its original statement on 25 November, in which it said it was questioning the “point of museums”, the Wellcome stated that, despite efforts to change the 15-year-old exhibition, it “still perpetuates a version of medical history that is based on racist, sexist and ableist theories and language”.

The Medicine Man gallery told the story of how the 19th-century pharmaceutical entrepreneur Henry Wellcome had amassed his collection of medical history objects; a number of items had previously been removed from the display, including a painting depicting a Black African kneeling in front of a white missionary.

The museum said it would work with communities to develop a new exhibition for the gallery and “give voice to the narratives and lived experiences of those who have been silenced, erased and ignored”.

The announcement was widely shared on social media and led to a heated discussion; comments were divided along culture war lines, with some accusing the museum of cultural vandalism and erasure of history, and others welcoming its transparency and efforts to re-evaluate its work in response to social change.

In a statement yesterday, the Wellcome Collection expanded on the reasons behind its decision, saying the items in Medicine Man represent a “very small proportion” of the 1.2 million objects in its collections, and emphasising that the display was one of five free spaces where the public can see its collections.

“As all museums do, we regularly review our spaces and exhibitions,” said the statement. “The closure of Medicine Man is the result of several years’ research and reflection, and is the next step in updating how we display items from the collections. As part of this ongoing programme, we updated the Reading Room in 2015 and in 2019, we replaced the Medicine Now gallery originally installed in 2007 with a new display called Being Human.

“Medicine Man is 15 years old, and the world is very different now to when it opened. If we were curating the space for the first time today, we would not choose to display these items through the lens of a single person, Henry Wellcome. This approach focused attention on the person who collected the objects, rather than on where they came from, who created them and why, and therefore their full context was obscured.

“Wellcome Collection is taking some time to consider how we will use this space in future. We will draw on the museum’s research as well as input from the public to tell more and different stories about human life and health in the gallery.”

Museums Association director Sharon Heal commended the Wellcome for its “brave and ethical” decision and said it was the “natural business of museums” to rethink displays and put them in contemporary contexts.

Heal said: “The MA supports this brave and ethical approach to the reinterpretation of the collections. It is absolutely normal for museums to reassess their collections and displays on a regular basis and especially important to rethink objects and stories that can cause offence to audiences.

“The Wellcome’s approach to doing this work with communities will enable new stories with contemporary resonance to be told. Museums across the UK are grasping the nettle of dealing with challenging issues in a thoughtful and inclusive way and the MA supports and welcomes this work.”