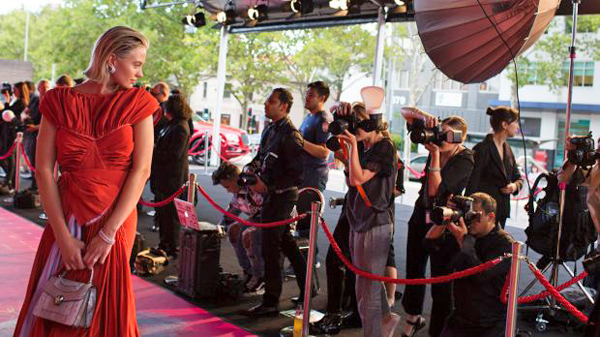 If anyone had quipped, “It would easier to send Jesinta Franklin to the moon than get Sydney’s glitterati to a black-tie, Met Gala-style event,” they would be eating their words this morning.

Because on a windy February night on Thursday, nearly 300 of the country’s top fashion heavyweights, including designers, editors, celebrities and patrons of the arts, frocked up for the first MAAS Ball, Sydney’s answer to the famed event staged each May in New York City and overseen by the formidable Anna Wintour.

The event, held at the Powerhouse Museum, aimed to raise funds for the Australian Fashion Fund, a MAAS Centre for Fashion initiative that secures acquisitions of Australian fashion to strengthen the museum’s collection.

And suspended above the dining space in the bowels of the Powerhouse Museum was the seven-metre artwork Museum of the Moon, by UK artist Luke Jerram. So technically, Jesinta Franklin did go to the moon, in Toni Maticevski no less.

Many of the stars were dressed by designers stocked at e-tailer Net-a-Porter or Mr Porter, the event’s partners.

Ms Bishop took to the stage in a floor-legnth Rachel Gilbert gown with a thigh-high split to extol the talents of the next generation of fashion talent who have received scholarship assistance under the Colombo Plan, and make digs at her parliamentary colleagues over their dual citizenship woes.

The only real news of the night was the announcement of an Akira Isogawa retrospective exhibition, to be staged in the summer of 2018-19.

Showing 25 years of the designer’s work, he has pledged most of the pieces that will form the show to the MAAS archives.

The ball was co-chaired by Kellie Hush and Edwina McCann, the editors in chief of Harper’s Bazaar and Vogue, respectively.

The women quipped that while their mastheads were technically rival publications, they often collaborated for the betterment of Australian fashion.

McCann was also instrumental in staging last August’s Dior gala event in Melbourne, as part of the fashion house’s 70th anniversary and a major exhibition at the National Gallery of Victoria.

The reporter attended the event as a guest of MAAS.