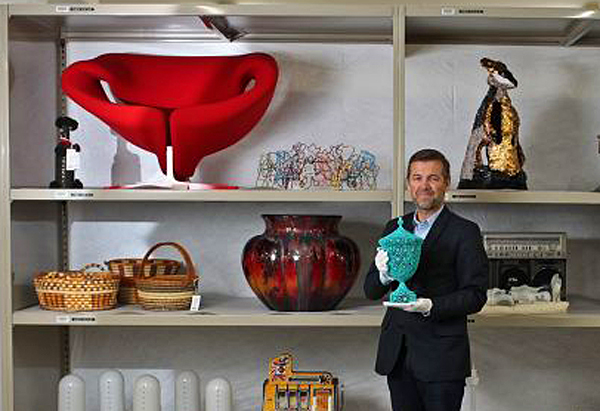 Peter Denham in the Powerhouse basement.

When the wondrous collection of the Powerhouse Museum was last valued for insurance purposes at $310 million, one object alone was deemed irreplaceable – and it wasn’t the iconic Locomotive No.1 that stands pride of place at its entrance.

Object number 18432, the world’s only working Boulton and Watt steam engine, which heralded the arrival of the Industrial Revolution in Britain, was judged priceless.

So how do you move a steam engine with a flywheel two storeys high and a cast iron beam weighing 9.2 tonnes?

“Carefully,” curatorial director Peter Denham said. “Very large objects are the most complex to move in terms of weight and size but small objects can have equal significance and with these objects you don’t want to lose them either.”

This is the herculean effort facing the 14 conservators, 22 curators and 14 registration staff of the Museum of Applied Arts and Sciences as the NSW government pursues its business case to shift the museum to its preferred site on the banks of the Parramatta River.

The staff are not without practice. Over the past year they have supervised the transfer of 55,000 objects to the Museum’s Discovery Centre in Castle Hill on top of the existing 150,000 objects stored there.

But this will be no ordinary house move, either.

Case in point is a prototype silicon sphere researched by CSIRO which weighs exactly one kilogram. Extraordinary care must be taken with the ball as every time it is touched it loses an atom or two from the polished surface, potentially compromising its perfect weight.

For any iconic category A item, like the sphere or Mawson’s sleds, a written risk assessment must be completed before they go out on loan and the objects must be accompanied by two people when moved around the Ultimo campus.

“I try and look at an object with the same care as a patient in hospital,” Mr Denham said. “The only difference is we are not saving lives.”

The Technological, Industrial and Sanitary Museum, as it was originally known, was first housed in the galleries of the Garden Palace in the Botanical Gardens, displaying porcelain, glass crystal, tapestries, books and carpets as well as machinery from the colonies.

The palace burned to the ground on September 22, 1882 and all but a few of the museum’s 200 objects were lost.

The copperplate writing of the museum’s stock book show the collection was restarted within days with gifts of botanical specimens, samples of raw cotton bronze figurines, candlesticks, vases bottles and trays.

The collection has evolved, Mr Denham said, through serendipity, philanthropy and curatorial scholarship: “We’ve set it up to be an encyclopedic collection,” he said, “but it’s more a kaleidoscope to me, at every turn there is something new, everything from fashion to automobiles.”