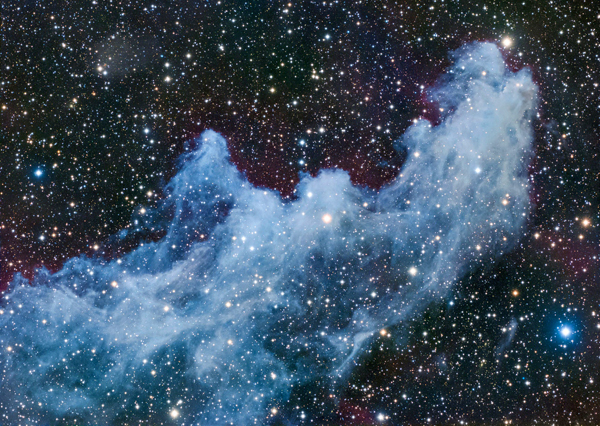 Witch’s Head Nebula, Phil Hart. The overall winner of this year’s competition is a deep sky image of the dust clouds IC 2118, also known as the Witch Head Nebula, “This is one of the best images I have seen of this object,” Malin said in his citation, “and does full justice to its delicate structure and colour, with pin-sharp stars all around.”

Urban light pollution has so dimmed the heavens that those of us living in cities barely register the awesome spectacle countless generations of our forebears contemplated nightly. The night sky inspired imaginative creation stories and intricate mythologies. It turned thoughts to religion and to science, to astrology and astronomy.

Yet even as the industrial age has shrouded the stars, technology has also put within reach of the average person the ability to see them like never before. The citizen scientist now has access to equipment that was once the province of dedicated astronomers bankrolled by principalities and philanthropy.

It is to encourage average people to reach for the stars that the Central West Astronomical Society, based at CSIRO’s Parkes Radio Observatory in western New South Wales, sponsors an annual astrophotography competition. The David Malin Awards are named in honour of the renowned British-born Australian astronomer and photographer who pioneered a range of techniques to photograph astronomical images. Malin judges the entries, with awards given in eight categories.

A touring exhibition of the 2017 finalists organised by Australia’s Museum of Applied Arts and Sciences, called Winning Sky 2017, has just opened at the Sydney Observatory. It will run until October 29, followed by other venues around Australia. A permanent exhibition can be seen at the Parkes Observatory. Here a few of our favourites.