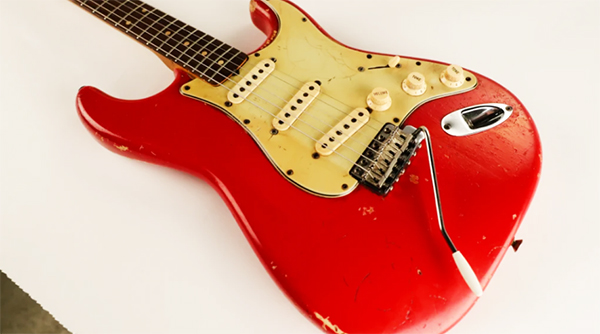 The Fender Stratocaster used by Jim Skiathitis to write, record and perform the song Bombora by The Atlantics. Credit: Edwina Pickles.

In the summer of 1963, Jan and Dean and The Beach Boys were top of the pops and so too were Australian surf band The Atlantics with a twangy surf instrumental that made its four band members household names.

Fame proved fleeting with The Beatles soon to dominate the music charts but the red Fender Stratocaster used to create that unique reverberated sound of Bombora is one of the first culturally significant objects in the Powerhouse Museum collection to be digitised.

The museum on Monday begins one of the largest digitisation projects in Australia, unlocking a wealth of information from 338,000 items in its 500,000-strong collection.

The digitisation process turns real objects into a virtual image, creating an online database that allows access to the treasure trove of cultural assets without the public actually handling them.

The Australian Museum has been using citizen scientists – volunteers from around the world – since 2011 to rapidly capture the hidden treasures of its natural history collection.

At the Powerhouse Museum, the job of photographing the objects and producing seven-megabyte files is expected to take two-and-a-half years to complete, says Powerhouse chief executive officer Lisa Havilah.

Once photographed the objects will be progressively relocated to expanded storage space at Castle Hill.

Arts minister Don Harwin said the relocation of the Powerhouse Museum to Parramatta was an opportune time to digitally capture the collection.

”Digitising the Powerhouse collection is a once-in-a-generation investment to enhance its accessibility for local, national and international audiences,” said Mr Harwin.

The digitisation and relocation process will cost $65. 7 million, and includes the museum’s very large objects. 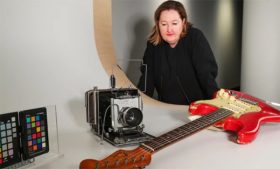 The biggest object to be digitised is the Catalina flying boat which has a wingspan of 31.7 metres, the smallest are 140 Japanese miniature glass animals made in the 1940s which are each only a few millimetres in size.

The 1961 Stratocaster was this year purchased by the museum with the assistance of the federal government. The guitar had been bought new in 1961 by Jim Skiathitis, who with his friend and drummer Peter Hood formed The Atlantics.

”What’s really exciting for us is it’s going to go up in real-time. As we complete the process we will be uploading it to the website,” Ms Havilah said.

Digitisation reduces the need for object handling, and guards against the risk of collection loss or damage due to fire, flood, earthquake, or for when the item is on loan.

”Most importantly what it does is give the community, researchers, and industry a better understanding of our collections. They will be completely accessible,” Ms Havilah said.

”What I hope from this is there will be a more significant increase in the presentation of objects from the collection with partner institutions across Australia and the world, giving the opportunity for them to be interpreted in a range of different ways through exhibition and research.”

Along with the Stratocaster, Max Dupain’s go-to camera for architecture photography for much of his career will be among the first objects to be digitally captured.

Over the course of the digitisation project, Ms Havilah said more than 2000 textile items, ranging from Egyptian cloth dated 350BC to a fabric sample from the Akira Isogawa collection acquired in 2019, would be digitised.

The Powerhouse begins a staged closure from June 2020 ahead of its relocation to Parramatta and will be collaborating with regional museums and galleries to tour objects from its collection in 2021-22.

Digitised objects from the Powerhouse collection will be available via maas.museum.