June 25th, 2021 | Browse other: News. | Tagged with: Powerhouse biggest investment in a single cultural institution in the state since the Sydney Opera House, Ultimo’s Powerhouse Museum set for $500 million makeover | 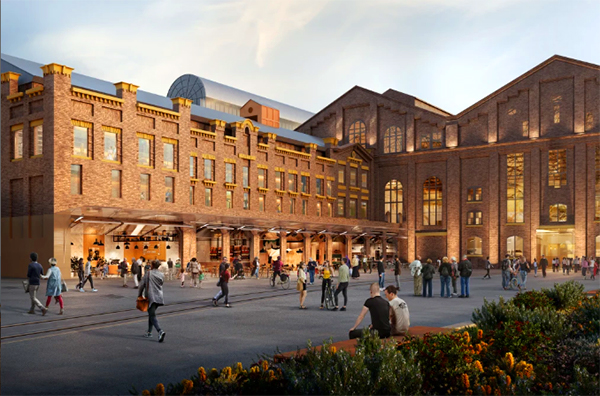 An artist’s impression of the new entrance and public square at the Powerhouse Museum at Ultimo.

The Powerhouse Museum at Ultimo will become the heart of a new cultural precinct, with the Berejiklian government pledging half a billion dollars to transform the institution almost a year after reversing the decision to shut its doors.

Treasurer Dominic Perrottet will announce the first tranche of a total of $500 million funding – the first major government investment in the museum since it was founded – on Tuesday as a cornerstone commitment of the NSW budget.

A design competition will be held this year to find an architectural team to reorient the museum’s entrance and to create a public square at its rear that will connect visitors to the future Tech Central, Pyrmont Peninsula and metro station development, Darling Harbour and Chinatown.

The revamped and expanded museum will have a new, but not exclusive, focus on fashion and design.

The Powerhouse Museum had become run down after then-Premier Mike Baird controversially promised to relocate the museum to Parramatta in 2015 – a decision overturned in 2020 – to redress an arts funding imbalance in western Sydney.

The budget commitment brings to $1.4 billion the cost of keeping the Powerhouse at Ultimo, building flagship headquarters at Parramatta ($840 million) and expanding the institution’s Castle Hill Discovery Centre ($60 million).

Together it represents the biggest investment in a single cultural institution in the state since the Sydney Opera House.

The museum’s heritage halls and the award-winning 1988 Wran Building will be preserved within the building’s existing footprint but a new gallery, workshop and studio spaces will be built.

The refurbished museum will be reconfigured to comply with the exhibition and security standards of international and national lending institutions.

This sets the scene for the Powerhouse Museum to challenge the National Gallery of Victoria for upcoming shows, including the Gabrielle Chanel exhibition, which opened in Paris in October 2020.

An Upper House inquiry into the original plan to relocate the Powerhouse to Parramatta had predicted the bill to taxpayers would exceed $1.5 billion. 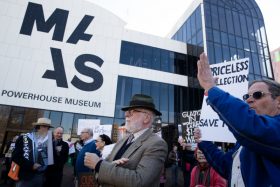 Protesters outside the Powerhouse in Ultimo in 2020. Credit: Janie Barrett.

Public protest spurred the Berejiklian government to abandon plans to sell the Ultimo site and it will now operate the museum across the two sites with Parramatta focusing on science and technology.

Arts Minister Don Harwin confirmed the iconic Powerhouse Museum pieces, including the Boulton and Watt Engine, Locomotive No.1, and the Catalina Flying Boat, would remain at Ultimo.

“The Powerhouse Museum’s collection has incredible breadth, telling the great stories of design from the industrial age to the great design achievements at the beginning of this century,” he said.

“The Powerhouse Museum has the most important design collection in Australia, ranging from some of the finest Australian-made jewels of the 20th Century, key works by Marc Newson, the Catherine Martin design archive alongside Australian designers Carla Zampatti, Romance Was Born, Akira, Jenny Kee, and Linda Jackson and International designers Chanel, Alexander McQueen, and Christian Dior.

“Over 30 percent of the Powerhouse collection sits in decorative arts – what better place to display these incredible objects than at the historic Ultimo site?”

Trust president Peter Collins and chief executive Lisa Havilah had pitched several funding options to NSW Treasury from a base case of critical maintenance to the once-in-a-generation refurbishment.

Mr Collins said exhibition spaces would be expanded. “We will create a vibrant public square beside the Goods Line, and creative industries workspaces that will become home for Australian designers,” he said.

Successive Powerhouse boards have flagged the urgent need for major investment. A 2014 strategic paper warned the museum’s business model was unsustainable, its permanent exhibitions tired, and the lack of world-class climate control standards prevented the museum from staging international shows.

Last month, leading philanthropist Gene Sherman called for the Ultimo museum to become the state’s first cultural institution dedicated to the display of design, decorative arts and fashion and offered to seed it with a large donation from her family.

The planned project works do not include the nearby Harwood building, which was to have been sold off under the original relocation plan.

For the foreseeable future, the Harwood building will continue to carry out its role in museum operations as home to the workshop, library and offices for staff.