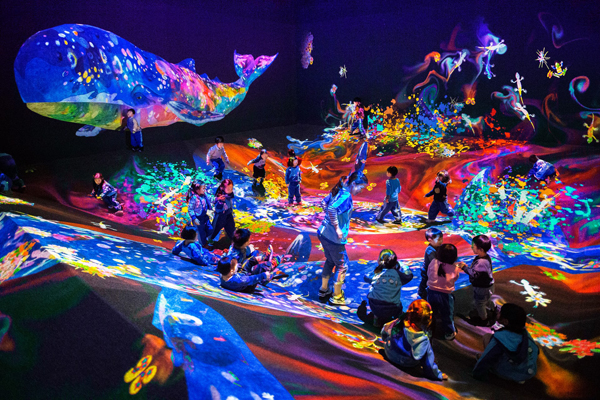 When my kids were aged two and four and three-quarters, I took them to a Tatsuo Miyajima exhibition, Connect With Everything, at Sydney’s Museum of Contemporary Art.

“What a good idea!” I thought at the time, an educational but fascinating encounter with numbers and lights and cool Japanese installation art. I was so wrong.

From the moment we set foot in the place, an army of deeply concerned staff tailed my children as if they were foreign spies, plotting the assassination of a key political figure. The second a little hand reached out to explore a blinking LED they pounced, shrieking, “Don’t touch!”

This at an exhibition that featured a toy train. It should have been called Connect With Nothing. It was a disaster.

The children never really recovered and now ask warily, when I suggest a cultural excursion, if the scary shouty people will be there.

Children want to touch everything. Well, mine do. Thus I have learned to stay away from art galleries – where touching is definitely out – and aim for interactive exhibits instead. This is why they remember, as if it was yesterday, their visit to Sydney Festival’s The Beach last year – which was basically a room filled with white balls that you could dive into – as if it was a great monotone plastic sea. “When can we go to the ball place again?” they ask often. “Never,” I have to reply.

So I was quite excited when I heard about Future Park at the Powerhouse Museum, which was billed as “a playful and immersive world to delight kids and adults”. It is the latest in what seems to be a bit of an awakening among museums in Australia to the fact that kids like to run around, be silly, make a mess and feel things with their hands.

In Australia, we have already had the wonderful Spiders at the Australian Museum, in which kids could dance like spiders, animate their own, play a kind of spider-pincer football and even stroke a real live huntsman. And next year, the high-tech Wonderland exhibition will open at Acmi: it promises 11 Alice In Wonderland-themed worlds to step into, including a CGI Mad Hatter’s tea party, a green screen croquet room and spaces that play with dimensions and distort reality. A mapping app will let you choose your own Alice in Wonderland character and offers a different experience of the exhibition depending which one you decide on.

In Future Park, devised by the Japanese collective TeamLab, we were promised eight collaborative and interactive installations to explore. We could even “add [our] artworks and watch them come alive”, responding to our touch. Sold.

The best part for adults is definitely the large glowing musical balls bit, properly known as Light Ball Orchestra. In the dark space the balls seem like lanterns and every time you touch one it sets off a little bell. The soundtrack fills the whole exhibition. It’s beautiful; I could have spent a long time in there. But the kids wanted to explore.