As chief executive of the Museum of Applied Arts & Sciences, Lisa Havilah has hundreds of millions of taxpayer dollars at stake. James Brickwood. 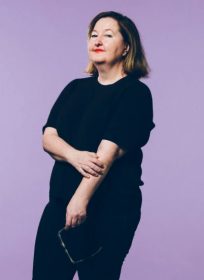 As chief executive of the Museum of Applied Arts & Sciences, Lisa Havilah has hundreds of millions of taxpayer dollars at stake. James Brickwood.

Lisa Havilah was only 21 years old when she opened her first art gallery. Growing up on a dairy farm in the southern NSW town of Berry, Havilah was, in her words, a failure at high school, disengaged and uninterested.

With no hope of gaining a place at university, she applied to the local art school and was immediately entranced.Keen to display her work, she and her boyfriend (now husband), ceramicist and curator Glenn Barkley, approached a Wollongong gallery about holding an exhibition. When they were turned down they took matters into their own hands, convincing a local business to rebuild a disused kitchen warehouse for them.

With the help of a youth arts grant, Havilah and Barkley hosted their inaugural exhibition, attracting an impressive 2000 people. The Wollongong mayor then agreed to pitch in $10,000 and connected them with BHP – owner of the nearby steelworks – which matched it.

By the time a local bottle shop committed to supplying free wine for exhibitions, the pair had created a viable, artist-run space that would ultimately operate for four years.

“It was pretty amazing, we were completely overwhelmed,” laughs Havilah today. “We really learnt that whole notion of how powerful a community can be in terms of supporting you.”

Havilah, 48, now has more than her own interests on the line. As chief executive of the Museum of Applied Arts & Sciences (MAAS), she has hundreds of millions of taxpayer dollars at stake.

Again she is seeking community support, this time from the population of greater western Sydney, for the most ambitious gamble of her career: overseeing the transportation of the Powerhouse from its historic site in inner-Sydney Ultimo to Parramatta.

For an arts administrator, getting one’s hands on the reins of any state-backed arts institution is a plum job. Being put in charge of one that’s on the cusp of a top-to-toe transformation is especially attractive.
Certainly the NSW state government, with a weather eye on the voters of western Sydney, is keen to tout the new Powerhouse as being its largest cultural investment since the Sydney Opera House.Running the Powerhouse is also a controversy-prone job. Uprooting the museum has angered some powerful and influential figures, including Cate Blanchett and Andrew Upton, businessmen Geoff Cousins and Graeme Wood, former premier Bob Carr, arts benefactor Penelope Seidler and the late director of the Art Gallery of NSW, Edmund Capon.

Former Powerhouse board member, businessman and collector Trevor Kennedy describes the move as a “serious act of vandalism”.

Indeed the move, first mooted in 2014, caused so much anger that a NSW Upper House inquiry recommended the existing Powerhouse be revitalised and a new institution built in Parramatta.

Nevertheless, the current NSW Premier Gladys Berejiklian, Arts Minister Don Harwin and his close ally Havilah are ploughing ahead towards an opening date of 2023.

We don’t want to be a nine-to-five museum, we want it to be a platform for events … a place that reflects that amazing cultural dynamic. — Lisa Havilah

Before taking the helm of the Powerhouse in January 2019, Havilah was the highly respected director of the Carriageworks arts precinct in inner-Sydney Redfern. She now answers directly to the Arts Minister, manages 197 staff and is responsible for more than half a million significant objects from the diverse worlds of science and medicine, engineering, music and fashion.

She and her team have been tasked with re-imagining what their institution should be about, 141 years after it was founded and about to be transposed into a radically different setting.

And it’s a welcome occasion to reboot and rethink. Her appointment came on the back of a tumultuous period at the Powerhouse, climaxing in 2018 when a gala fashion fundraising ball that cost $388,000 to stage raised just $78,000.

Director Dolla Merrillees stepped down soon after. Havilah became the fourth MAAS leader in 5½ years, and plenty in the arts world called the job a poisoned chalice. However, there was also a consensus that if one person could pull it off, that person was Lisa Havilah.

In short, the woman is a powerhouse, if you’ll pardon the pun. Outwardly modest, she has an iron-clad will to achieve her desired outcomes.

But success at the speed and magnitude Havilah insisted on at Carriageworks is rarely realised without ruffling a few feathers along the way.

In late December, Havilah stood by Minister Harwin for the long-awaited announcement of the architects of the new Powerhouse: Paris-based Moreau Kusunoki with Australian firm Genton, a consortium soon nicknamed MKG.

Their winning design will take shape on the Parramatta River, about 24 kilometres west of the Sydney CBD, and be central to the much-hyped Powerhouse Precinct, which local and state governments hope will transform Parramatta into a revitalised, 24-hour cultural hub.

A walkway will connect the museum to trains, a new underground metro, light rail, “eat street” and the river. The new Bankwest Stadium and proposed $100 million redevelopment of the Riverside Theatres, as well as the Western Sydney Parklands, are all integral to the development and part of Premier Berejiklian’s “30-minute cities” concept: putting all Sydneysiders within 30 minutes by public transport of one of three CBDs.

“For Parramatta to have this major cultural institution at its heart is a very symbolic thing the government has done, in saying that access to culture is something that’s important for western Sydney,” says Havilah.