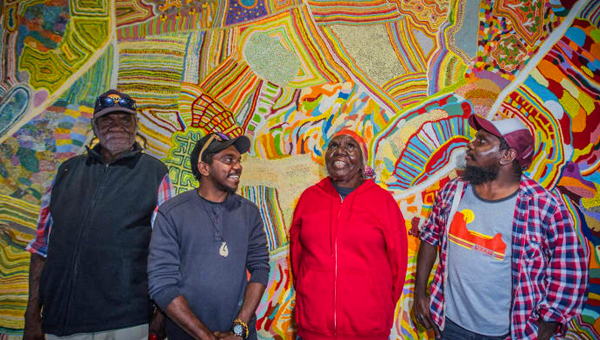 The National Museum of Australia’s blockbuster Songlines: Tracking the Seven Sisters exhibition has won the nation’s most prestigious award for a museum or gallery show in 2018.

At Tuesday night’s Museums and Galleries National Awards ceremony, held in in Melbourne, Songlines won the overall award for the most outstanding exhibition of the year. It won the award for best temporary or travelling exhibition (for projects with a budget of more than $500,000) before taking out the major award.

The National Portrait Gallery won an Interpretation, learning and audience engagement award (for projects with a budget of $20-150,000) for its tablet-based app Headhunt!

The Australian War Memorial won a Permanent exhibition or gallery fitout award (for projects with a budget of $20-150,000) for Art of Nation: Australia’s official art and photography of the First World War.

The Museum of Australian Democracy at Old Parliament House won a Permanent exhibition or gallery fitout award (for projects with a budget of $150-500,000) for PlayUP – the right to have an opinion and be heard.

Canberra Museum and Gallery was highly commended in the Interpretation, learning and audience engagement award (for projects with a budget less than $20,000) for its The Art Box project.

A world first in scale and complexity, Songlines ran in Canberra from September 2017 to February 2018, attracting 98,855 visitors.

Songlines showcased sections of five Indigenous Western and Central Desert songlines, telling the story of a journey made by a group of female Ancestral beings who are pursued by a powerful mythological, shape-shifting figure.

“This award is really a tribute to the work of the APY, Ngaanyatjarra and Martu people who led this project and worked with the national museum to share and preserve the foundation stories of our ancient continent,” said NMA director, Dr Mathew Trinca.

“These communities opened their hearts and minds to share their Seven Sisters narratives with the world.”

“Songlines: Tracking the Seven Sisters acknowledges the responsibility that Australian museums have to preserve, explain and celebrate Indigenous culture,” he wrote in September 2017.

“It is a bold and beautiful exhibition where the Indigenous voice is loud and clearly articulated and not drowned out by those of anthropologists and antiquated museum practices.”

Key paintings and objects from the exhibition were centre-stage at the March 2018 Association of Southeast Asian Nations Special Summit in Sydney and the NMA now plans to tour the exhibition nationally and internationally.

The MAGNAs are open to all non-commercial museums and galleries and other cultural and collecting institutions who are members of Museums Galleries Australia.