September 23rd, 2020 | Browse other: News. | Tagged with: MAGNT calling on anglers to photograph or collect samples of worm gobies, Museum and Art Gallery of the Northern Territory, The ferocious-looking worm of death | 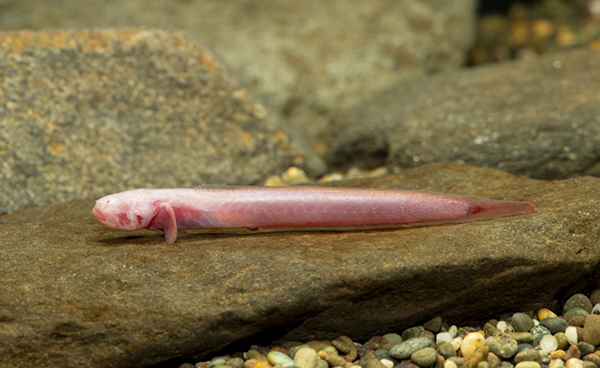 The Museum and Art Gallery of the Northern Territory is calling on anglers to photograph or collect samples of worm gobies, especially one known as the worm of death, to help fill a big gap in science research. These peculiar worm gobies share the same Top End estuaries and river mouths as prized barramundi.

Also coined freaky fish’ alien or deep-sea monster, anglers may accidentally lure these small 5-30cm fish on their barra foray as the wet season arrives. Samples so far include scaleless, small black eyes or blind gobies, while others feature beards.

The worm of death is a specific thin golden-pinkish worm-like fish with vicious large fangs. New worm goby species are still being discovered and scientists would appreciate assistance from anglers who can identify the catch.

“Top End anglers can become citizen scientists to help find out more about these mysterious fishes.

“Worm gobies are difficult to catch with traditional research equipment under muddy silt.

“If fishos accidentally lure a worm of death, photos or donations of specimens to MAGNT can help advance scientific knowledge.

Gobies are one of the most diverse fish families with around 2000 species. Worm gobies are a special group in the family that has adapted to live in mud. They have poor eyesight, but lots of sensory features to help detect prey and predators.

MAGNT director Marcus Schutenko said, “The MAGNT Fishes Collection is unrivalled in representing the biodiversity of tropical northern Australia and its near neighbours.”

MAGNT’s team research and interpret with rigour and facilitate innovative scientific activity. If you have hooked a worm goby, contact info@magnt.net.au or call 08 8999 8264.